My Facebook feed was filled with model horse show photos yesterday, the best of which came from the Quabbin Valley Performance Open show in Spencer, Massachusetts. Tackmaker, Darleen Stoddard posted this report on her own blog and was kind enough to allow me to share it here as well. Thank you so much, Darleen, and congratulations on all your wins!

I had a blast yesterday at Quabbin Valley Performance Open.  To say the competition was stiff would be a *HUGE* understatement!  It seemed to me to be as stiff as showing at Nationals, at least from what I remember of my last time showing at Nationals.  My usual style of showing the same tack set with minimal changes in a bunch of different classes just does not really fly anymore.  I’m slowly convincing myself that making tack for my friends and living vicariously through them is sounding more and more where I want to be.  I’m getting too old to change tack/accessories for every single class, and I really hate holding things up for the judge.  Woo, stressful. 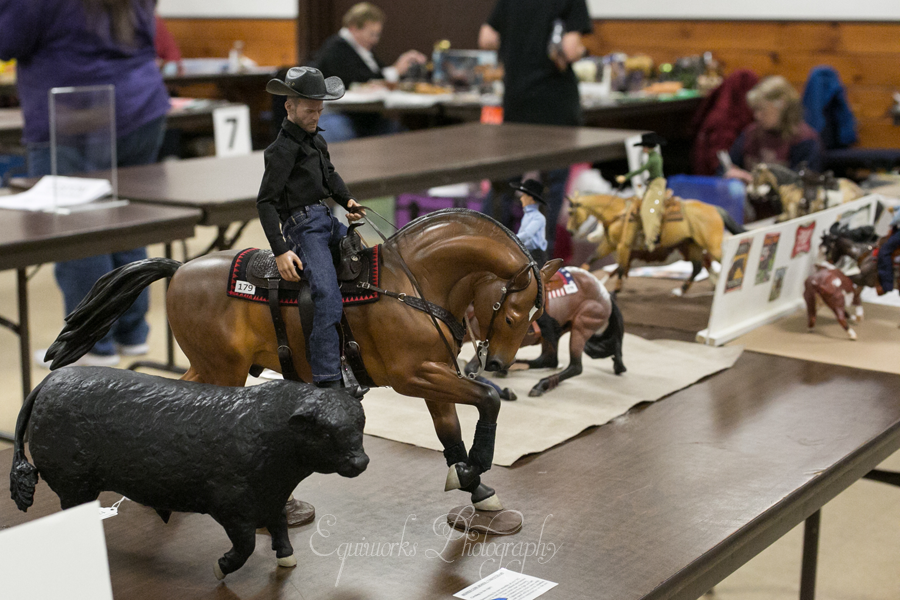 Speaking of huge, the horse pictured above is owned by Linda White.  He is 1:6 scale and dwarfed the traditional size (1:9 scale) horses pictured in the background.  That said, I would have a blast making tack for something that scale.  There’s so much more detail that could be added to something that size!  And the doll?  Wowza!  He looks real!  I want to say that can used for the barrel is large baked-bean size. 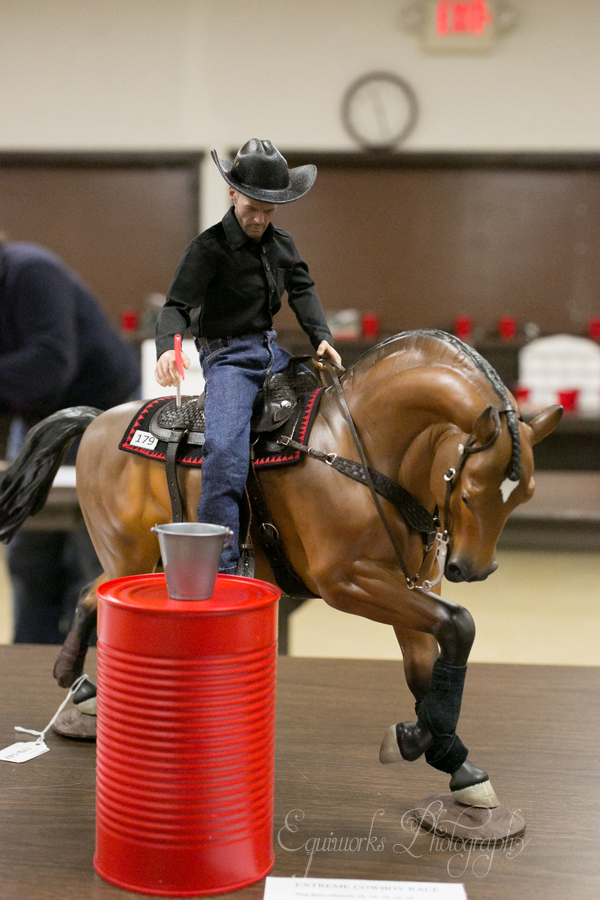 Here’s Jackie Arns-Rossi’s horse, Heidi (Morgen Kilbourn Hazel resin), with all her champ ribbons for the day.  Jackie does not have a problem with multiple tack changes, nor does she have a problem with showing multiple horses in multiple divisions.  She claims this is “fun”.  Love my crazy hobby friends! 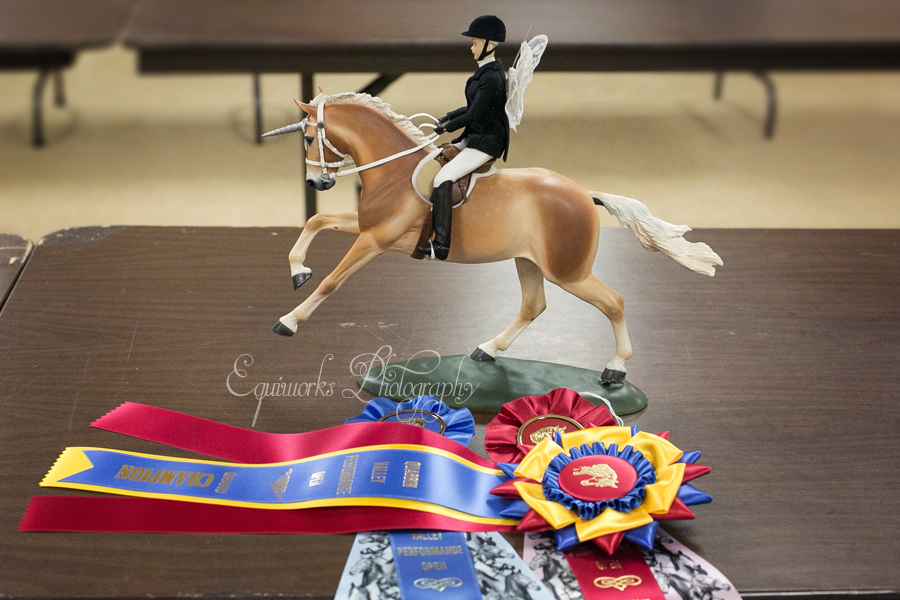 And you know how I have said that my tack either tends to stay in our region or come back to our region?  Well I spotted a couple of my sets owned by Danielle Feldman, who moved to our region some years ago.  I’m always glad to see that they are not only still loved, but still being shown! 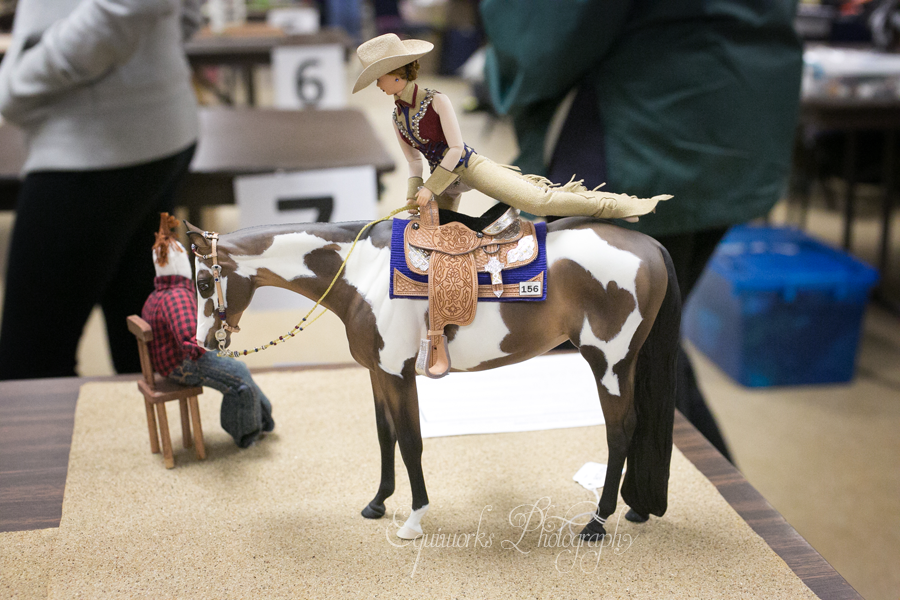 I can’t remember when I made the Southwestern themed set (I think 2006), but the Celtic saddle is over 10 years old! And Danielle Miller was showing her cross set as well.  Pretty sure this one is also over 10 years old.  Love this custom breyer by Tiffany Purdy: 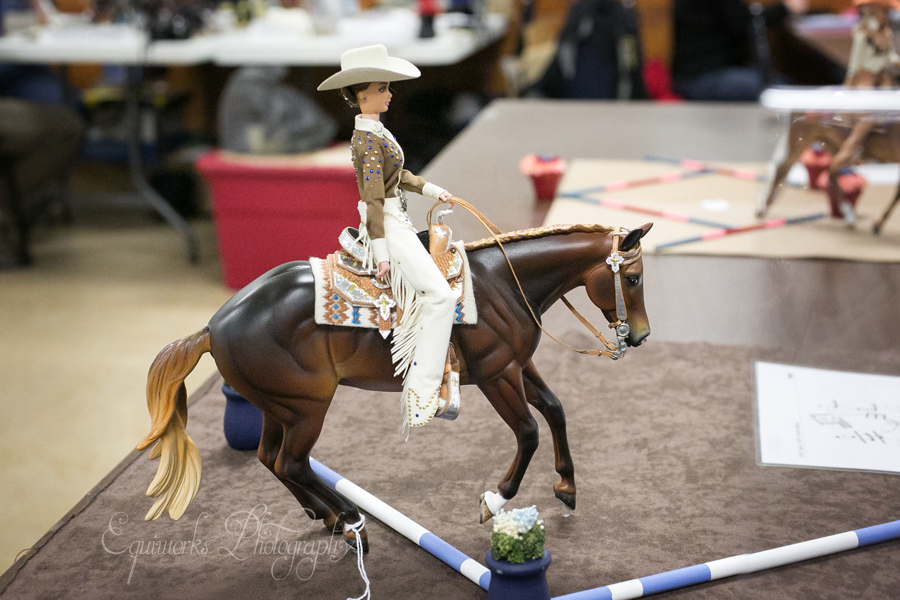 My new Morgen Kilbourn Ranch Mare, painted by Liz Bouras arrived in time to bring to the show.  She’s more of an all-around horse, and I’m still trying to figure out what to do with her, but she’s fun in both English and Western.  Alas I didn't get any shots of her under English tack. Here she is doing her ranch sorting thing: 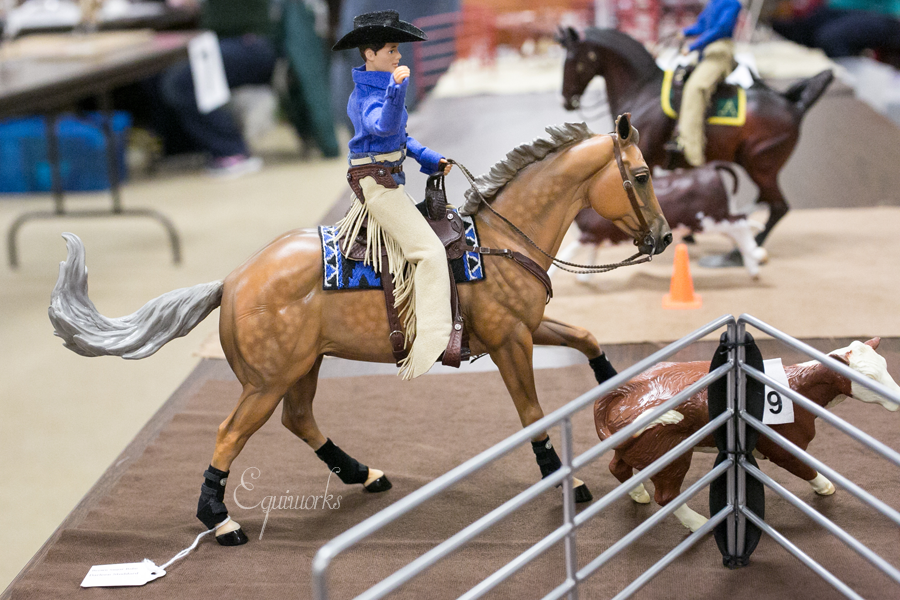 She did take reserve champ in the really tough Stockwork division. 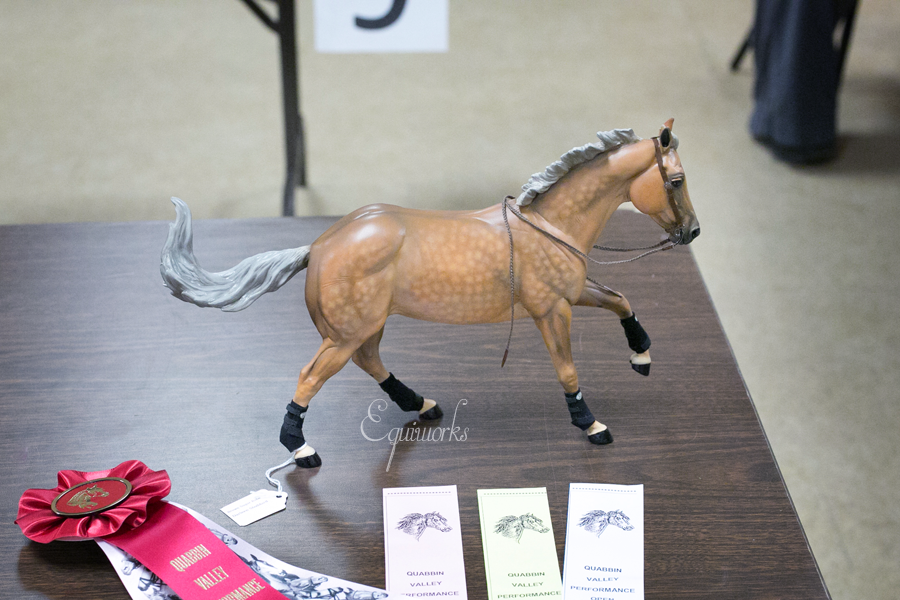 But my champion of the day was my Carol Williams Victrix p/b Ann Harris.  Chromie hanging out with my one *HUGE* can of Dew, waiting for his western classes: 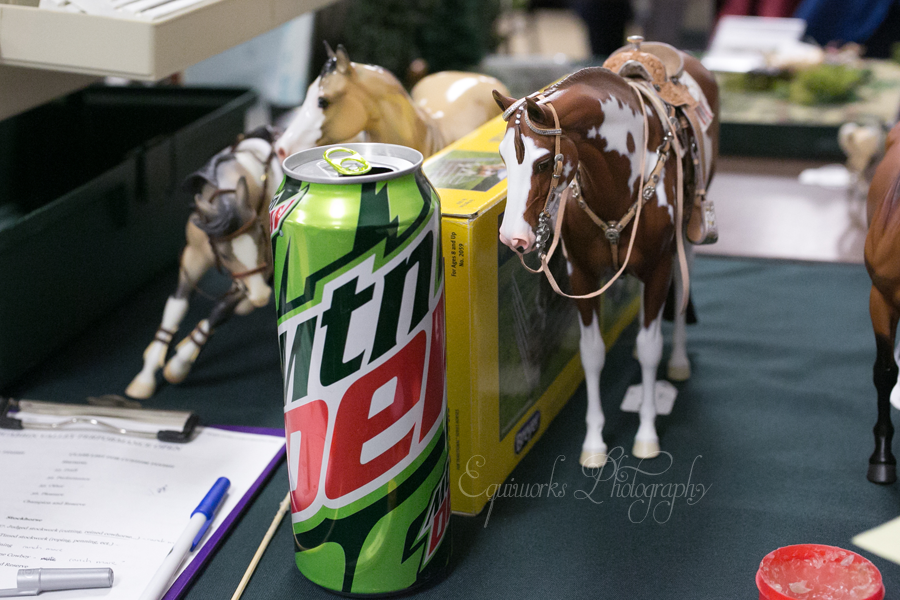 He received some much coveted NAN/Regionals cards in Showmanship and Parade, took reserve champ in costume, and went on to win the Four-Square Championship. 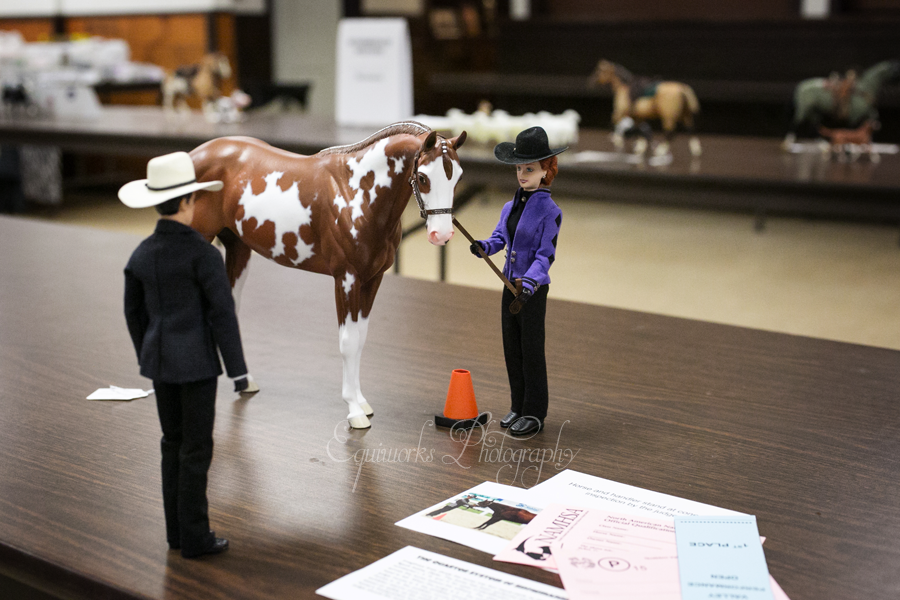 I've never shown a standing horse in more than 1 class before, was a fun challenge! 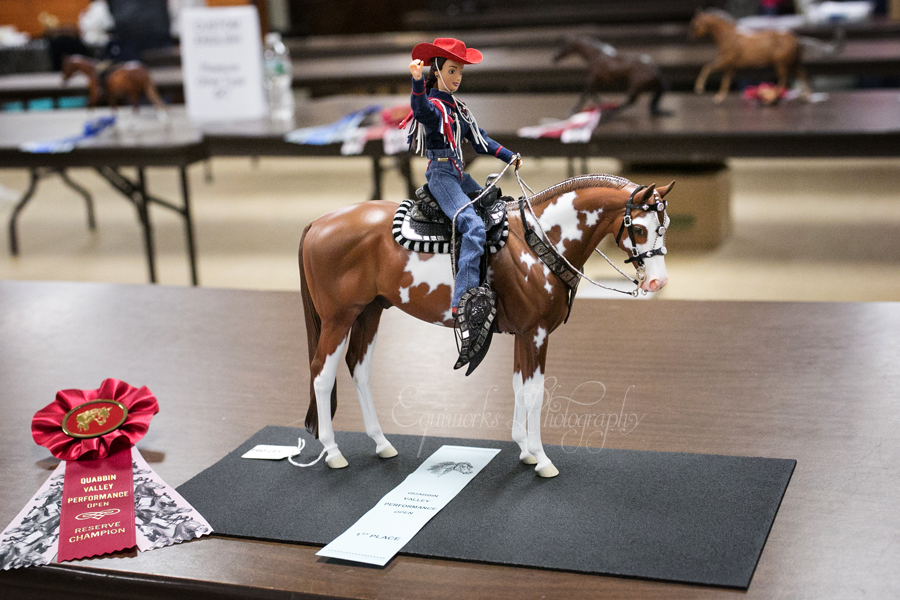 Thanks again, Darleen. That was great. Be sure to check out Anne Field's blog for more QVPO stories and photos!
Posted by Braymere at 2:15 PM