Carol and I went to the National Western Stock Show parade in downtown Denver today. 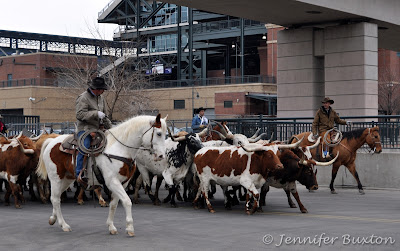 Because parking in LoDo is difficult, we decided to take the light rail.  Neither of us rides the light rail often, and we overestimated the amount of time it would take to reach our destination.  As a result, we arrived at the parade route really early.  It was too cold to stand and wait, so we decided to walk to Union Station.  There were a couple horses there, but they weren't terribly interesting. 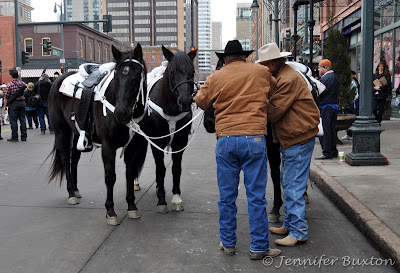 We walked a bit further and saw a few more horses. 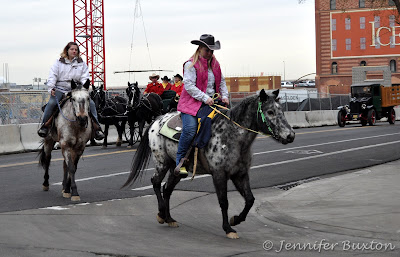 Naturally, we decided to keep walking. 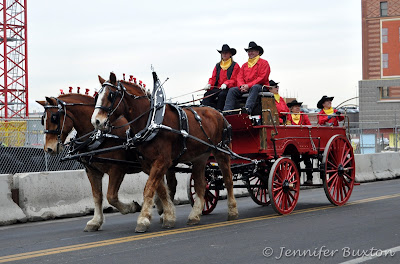 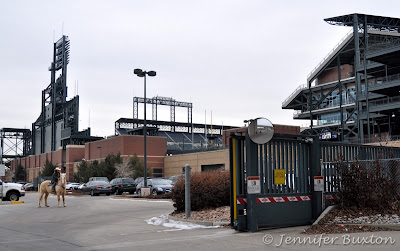 which was Coors Field! 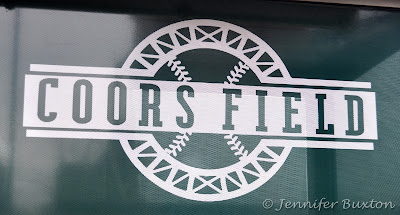 We weren't allowed inside the gates, 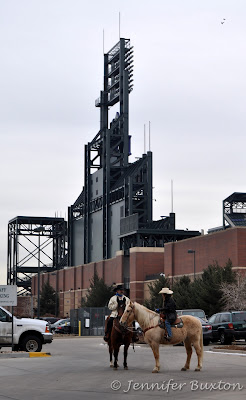 but I had no trouble finding ways to amuse myself! 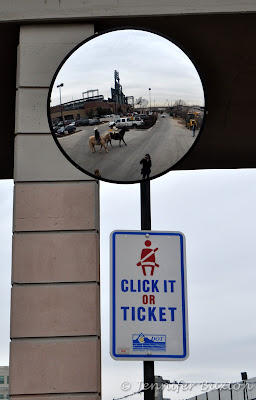 Just as we'd decided that it was time to return to the parade route, there was a clatter of hooves... 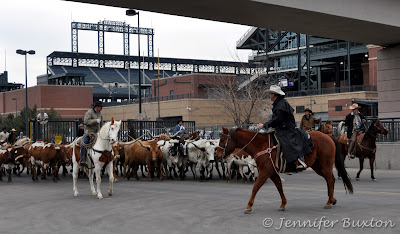 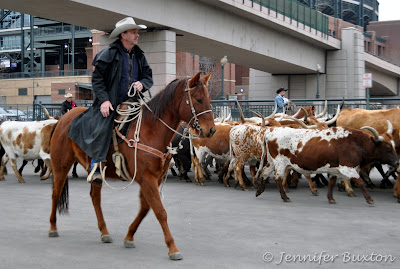 started making their way down Wynkoop. 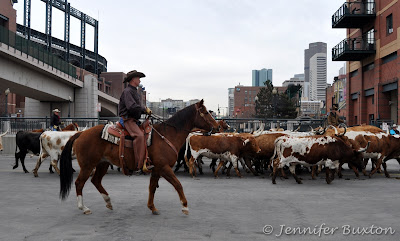 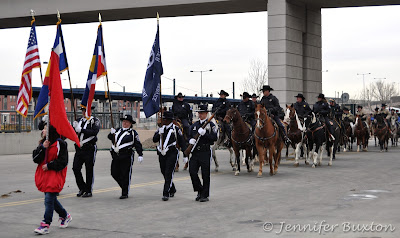 We followed the riders as they made their way to the parade's official start. 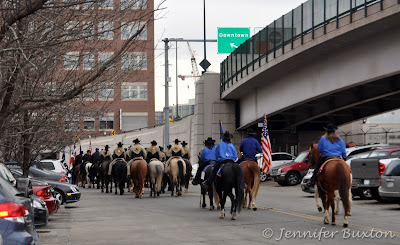 Pre-parade is less crowded and less formal than the real parade. 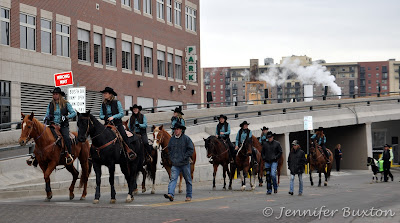 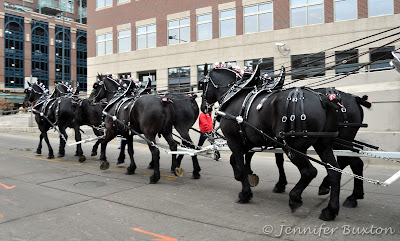 we were able to get much closer to the horses. 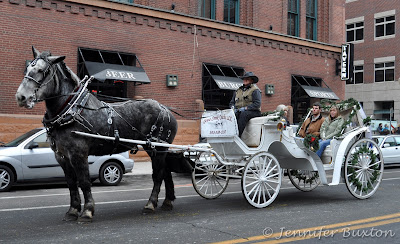 The riders were relaxed and happy and many of them talked to us. 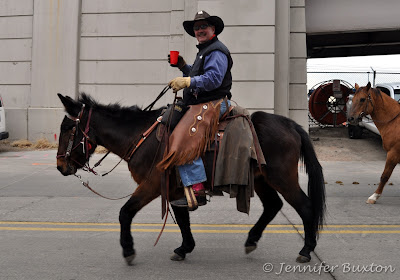 We were having so much fun that we lost track of time and never made it back to the actual parade route.  I was mildly disappointed to have missed the official parade, but the honestly, what the pre-parade was just as good. 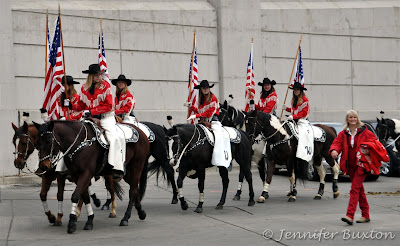 Neither of us was ready to go home, so we decided to go out for lunch.  We were nearing one of Carol's favorite restaurants, when I was once again distracted by the sound of hooves.  We made a quick detour down to 15th Street and came face to face with a couple parade horses. 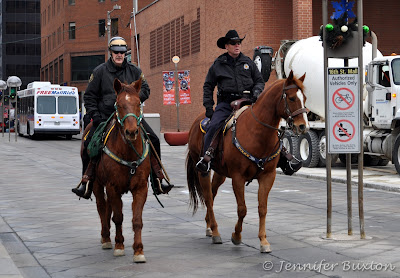 I peeked down the street and started to laugh. 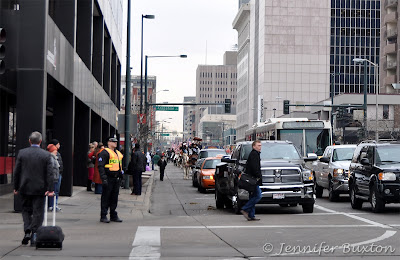 Without meaning to, we'd stumbled upon the post-parade! 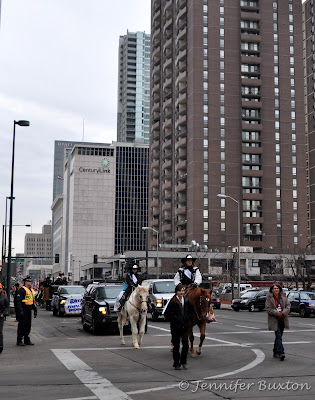 Sorry, Carol.  It looks like lunch is going to have to wait! 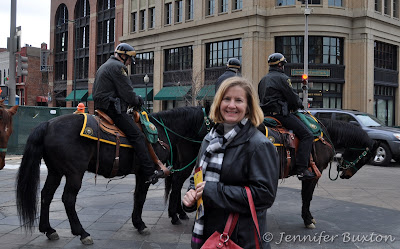 We spent the next hour watching the post-parade. 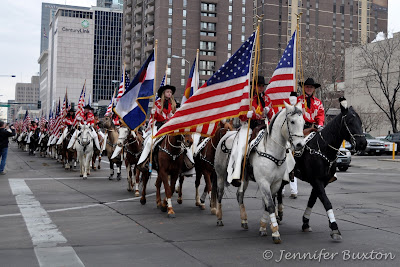 It was even more exciting than the pre-parade... 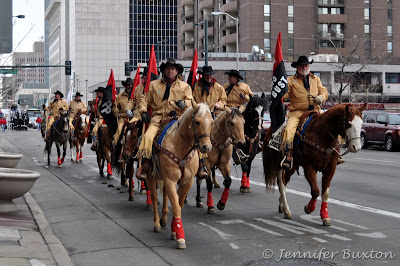 mostly because the post-parade involves traffic! 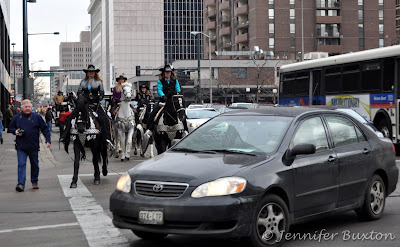 When the street sweepers passed us for the second time, we knew we'd seen all the parades we were going to see. 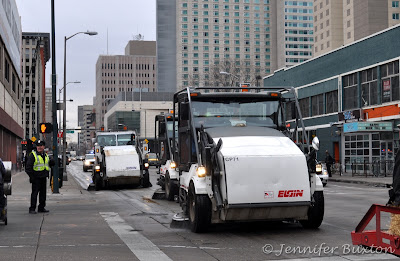 We headed back to the light rail, hungry but happy.  Thank you so much for going to the parade(s) with me, Carol.  I promise next time we will make it to the restaurant!
Posted by Braymere at 8:09 PM