Ever since I announced that I was thinking of leasing an Arabian, I've had a lot of people go out of their way to sell me on the breed. I've heard stories of Arabian beauty, Arabian intelligence, and--most of all--Arabian loyalty. Everyone seems convinced that a little bit of Arabian exposure will turn me into a hard core Arabian lover.

It's going to be an uphill battle, though. Rev is not the first Arabian I've ever met. On the contrary, my entire riding life has been filled with Arabians.
Unlike most of my childhood friends, I never dreamed of owning an Arabian. I liked them because I liked all horses, but they were not my breed of choice. Subsequent real life interactions with Arabians did nothing to alter that view. Arabians were fine, but they didn't particularly excite me.
When I was eighteen I moved to Fort Collins, Colorado to attend Colorado State University. A year later, I met Trisha.
Trisha's family bred Arabian horses on their forty acre farm in nearby Wellington, Colorado. 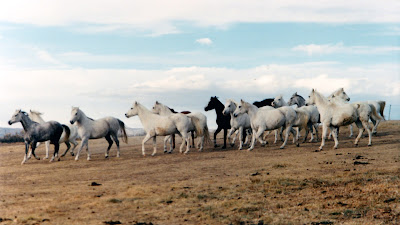 I was surrounded by Arabians! 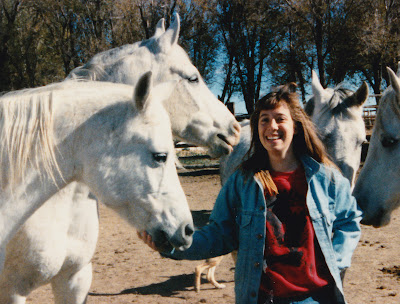 For three years, I rode Arabians every single weekend.
Even though I grew pretty fond of some of those horses, I continued to maintain that I was not an Arab person.
After I graduated, I moved to Tennessee to take a job on the Hunter/Jumper circuit. There are a few Arabians showing on that circuit but not many. I reasonably thought my Arabian days were over.  Then I met Cathy...
and her herd of Arabians.
Once again, I found myself riding an Arab!
Although I really did like this little mare, I continued to maintain that I was not an Arab person.
Meanwhile, Trisha had also moved from Colorado to the Eastern side of the country. Once a year I'd go visit her and her new Arabian, the occasionally brilliant but always erratic, Zee. Here they are at Michael Poulin's winter headquarters in Florida...
and at Jessica Ransehousen's Blue Hill Farm in Unionville, Pennsylvania.
Despite--or perhaps because of--her idiosyncrasies, I was a big fan of Zee's. Still, I continued to maintain that I was not an Arab person.
Eventually, I got married, moved back to Colorado and started a family. When I was ready to start riding again, I did so at my friend, Fran's house. Guess what kind of horses she breeds?
Yep, more Arabians!
I am not an Arab person, but somehow the Arabs always seem to find me.
I suppose it's possible that Rev will be the horse that turns me into a hardcore Arab lover, but I kind of doubt it...  And, you know, even if he does, you'll never get me to admit it!
Posted by Braymere at 5:39 PM