Thanks mainly to Danielle Seivers of Australia, this will not be a post-free weekend!  Readers of Danielle's blog, Daley Park Australia, will recognize this post.  However, it's definitely worth a re-read!  Thanks again, Danielle! 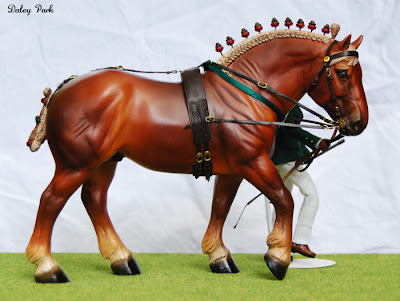 (Before you ask: yes, I really am that mean to my models. I have one named Fluffy; what did you expect?) 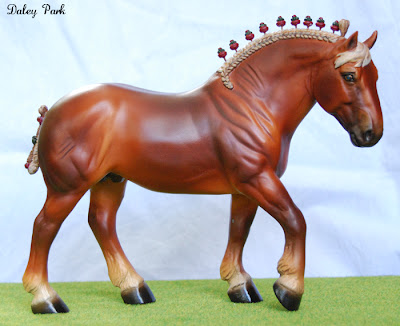 Lionswood Benjamin, stable name Doorstop, started out as a Christmas gift from my BFF Stacey. He's a classic-size BHR Drafter resin. There was a reason for his bargain basement price of $25 US - he was unpainted, but had been poorly prepped. After his purchase from MHSP, we sent him straight to the magical Gina Hyatt of Dog Hair Studio, who worked hard to remove his previous layer of primer, and restored the body to his smooth and detailed glory. 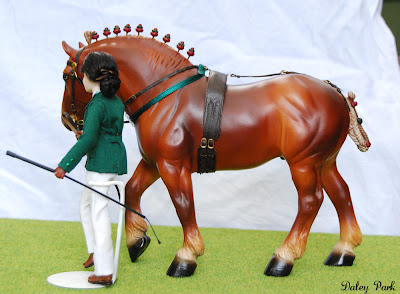 She then passed him onto Karen Zorn. After some discussion I decided I wanted a Suffolk Punch, so sent her lots of reference pics and asked her to sculpt some mane bobbles, and braid his tail. She did just that, giving him gorgeous maroon and dark green ribbons, and changing the mould's swishy tail to one with some serious braided detail. Just check out that butt! 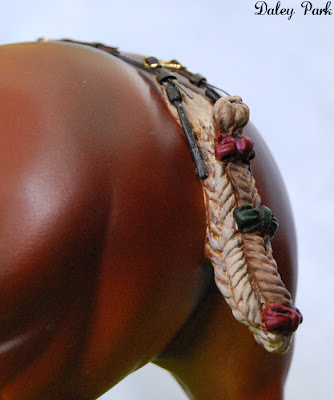 He arrived to me this past Tuesday, just a few days before a live show - the last one in my state of Victoria for a long time. Desperate to make sure he got out and shown before DUN (Australian version of NAN), I worked super hard to make him a stallion surcingle and bridle in time. 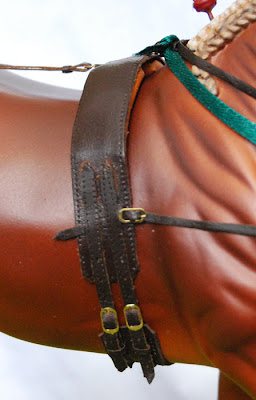 Did you know there is very little documentation online for showing Suffolk Punches? With little choice but to copy from photos and wing it, I scoured Flickr, tried to spot what was the most common, and copied that. 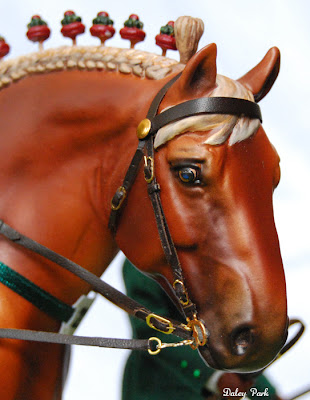 The tack, as it tends to do, fought me the entire way. I redid both the surcingle and bridle twice before I was happy with them (read: I had no time to do them again). 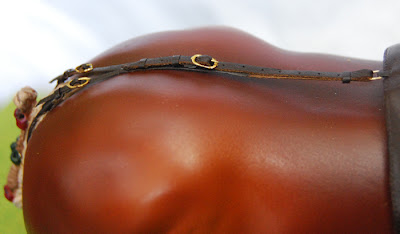 His doll is a custom Heidi Ott doll by the talented Joan Yount in the US, and she arrived just a day after Doorstop - talk about cutting it fine! She's dressed in the British style of light-coloured pants, and a 'tweed' jacket (Joan couldn't get tweed in scale, so we went for solid green). She doesn't have a name yet, but I think it will need to be something British. 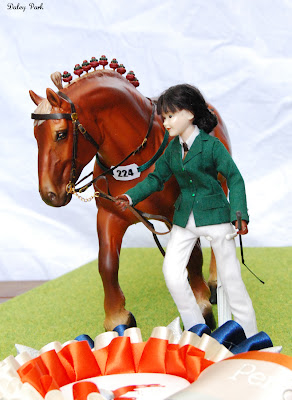 I packed them up and carted them off to Performance Extravaganza Live Show this past Sunday, which is an all-performance live show, split by finish. He surprised me by winning his Other Performance class with his led entry (and hand-written explanation card!), and then going on to win Supreme Champion CM/AR, against some seriously tough competition. I've been going to live shows for over five years, and he was my first Supreme Champion - I was so ecstatic I very nearly cried! 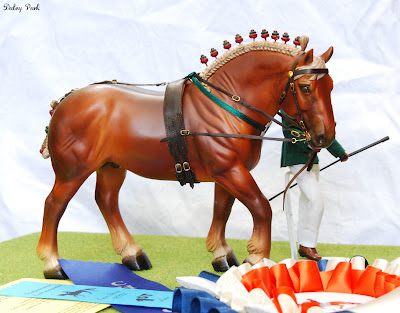 He wasn't in any danger of going anywhere before, but his win has cemented his place on my shelf!
Posted by Braymere at 4:56 PM