I'm taking a little break from NaMoPaiMo today, at least as far as blogging goes. Today's first post is a show report from Meghan Namaste. Thank you, Meghan!

I thought it was fitting to start off my guest blogging this NaMoPaiMo with a Sleigh Rally wrap-up, since this show occurs annually in early February and is part of the reason I’m usually a part of Team Last Minute. Per usual, I began the month attempting to get one. Last. Horse. Done. Not a horse this time, though, an ass. Suerte! I was able to snag one of Sarah Minkiewicz-Breunig's first copies of her new Pega donkey sculpt, and I had been tirelessly working to finish him. I had chosen a red reverse dapple roan color after falling in love with a particular reference, much as I had fallen in love with the sculpt itself. Thus, the first week of NaMoPaiMo was all about Suerte, and decidly NOT about my NaMoPaiMo pegasus. I managed to complete him with a few days to spare, giving me just enough time to make some performance props.

Suerte wasn’t the only new face in my show string, as I had completed my Mini Anise in January. I didn’t win her at The Jennifer Show, but a generous hobby friend sold hers to me at a price I could afford, and I am so glad she did. I went all out with her paint job, challenging myself to paint both a better bay and a more accurate pinto than I previously could. I was excited and nervous to see how my newbies fared, and we hit the road on Friday. The trip takes around five hours, and it was a relief to get away from the snow. Even though Wisconsin is not exactly a balmy climate, they have hardly any snow compared to our massive amount in the UP of Michigan. We had a leisurely drive and did a little antiquing and stopped at the End Of The Trail sculpture in Waupun before heading to our Airbnb in a nearby town. In the morning it was about a fifteen minute drive to where the show is held, through back county roads. The Sleigh Rally show, previously held in Columbus, changed venues last year to Springbrook Farms in Burnett. The model horse show is part of “A Winter Day At Springbrook”. There are vendors, food, dog sleds, a photo contest, horses, and of course, sleigh rides. This is undoubtedly one of the coolest venues for a model horse show that I have experienced. The huge barn has been fully renovated and the lower level is full of vendors and the Sleigh Bell Café. The barn is equipped with an elevator and the model horse show is in the upper level. The ambiance in this venue is absolutely wonderful. From the old barn wood and the relics displayed in glass cases and hanging from the rafters, to the charming lighting, it doesn’t get much better than this. 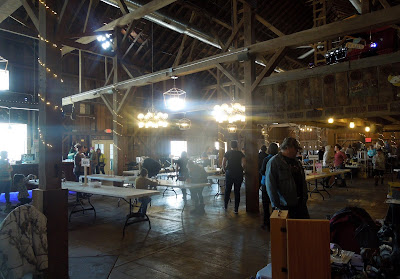 The two previous times I attended Sleigh Rally, I judged Open Performance, plus the Youth and Kids classes. This time, I wanted to be able to experience the show, and it was a blast. The show is open to the public, which is great for outreach and education but can also be problematic. Last year there were a lot of problems with people picking up models and touching them without asking (despite ten thousand signs telling them not to do this). I’m happy to report that this year the people that came through were very respectful and there weren’t any model horse groping incidents that I am aware of.

I was able to try out some new performance props and my new dolls, and while I need a lot of practice and polish, I was able to pull a couple placings in big, tough Western classes. I looked at the other entries, took a ton of pictures, and made mental notes on what I need to work on in the future. I plan on showing performance again at a local show in April and gaining more experience at a more relaxed pace. I’m still too much of a performance newbie to keep up with seasoned pros, and that’s okay! I had intended on showing in the English classes as well, but English started right at the same time as CM and AR Workmanship, and I made the executive decision to focus on Halter and not stress myself out trying to work with my fiddly English tack and potentially miss classes. As it turned out, that was a good decision.
The CM and AR divisions ran concurrently throughout the day, which was great for those of us who show in both. Breed Halter came first, followed by Workmanship. Steffanie Bodamer judged CM, and Vicky Smith was the AR judge. The day started on a high note for me with my AR and CM foals winning their classes AND all three picking up awards in the callbacks! RR Little Miss Sunshine and RR Sorry Not Sorry swept the CM Foal callbacks, and RR February Follies, my NaMoPaiMo prize Poquito from last year, took Champion AR Foal over some incredible Traditional foals, including a stunning Warmblood foal painted by Tammi Palmarchuk. It was a very special moment for me, since in the past few years I have gone from never having anything to show in Foals, to creating foals that consistently exceed my expectations. Good babies! 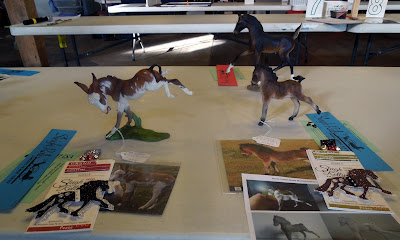 It wound up being a banner day for foals, as RR Little Miss Sunshine ended up taking both Overall Reserve Champion Custom, and Overall Grand Champion Custom Workmanship. This little kicking donkey foal was a clinky I found at the CHIN one year, and she kicked ass! 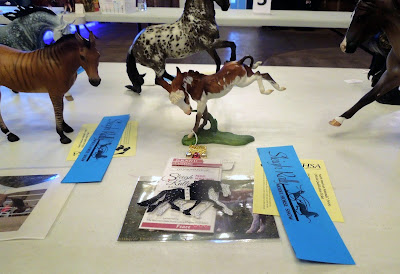 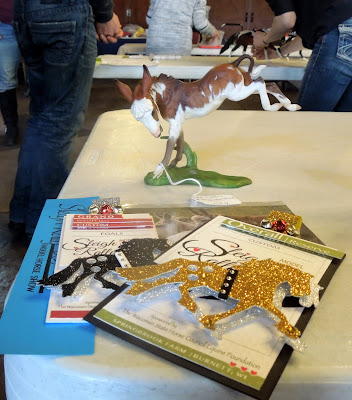 So, how did my newbies fare? Suerte aka RR Sin Medio Asno won his Workmanship class... 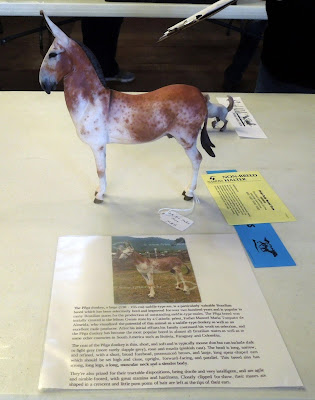 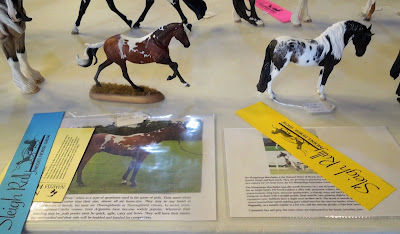 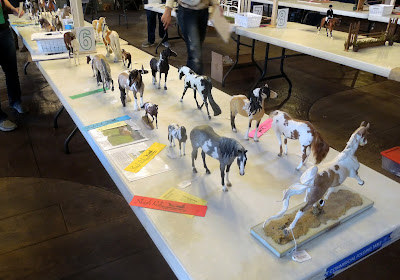 The newbies are headed to Nationals! And some babies just may have earned their spot in my NAN show string, too. Other highlights included my favorite performance entries, 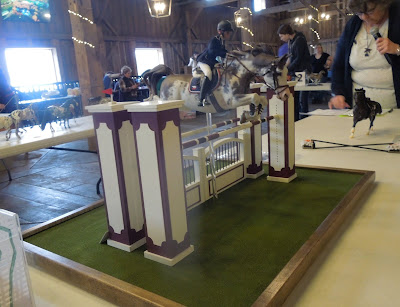 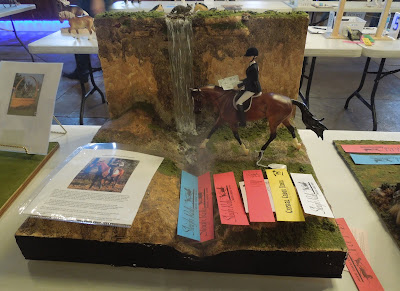 spotting an OF plastic holy grail out in the wild... 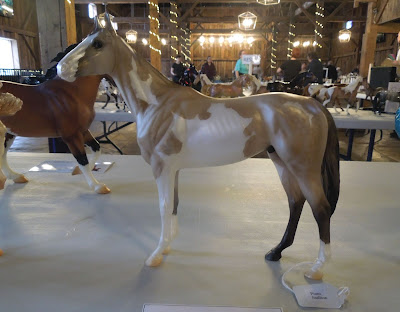 and my friend Susan's beautiful Caldero resin painted by Jeanne Sarr winning Overall Grand in AR Workmanship. This was his first show, and Susan's first Sleigh Rally (she came all the way from Kentucky!). 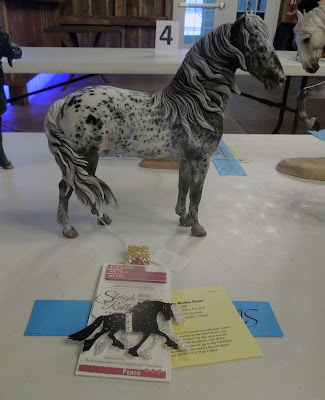 I had so much fun at this year's Sleigh Rally show. I am already looking forward to 2021!
Posted by Braymere at 10:42 AM