How to make a custom base, part one

NaMoPaiMo is all about painting, but there's a lot of sculpting that happens this month, too. Today's first Tutorial Tuesday post is part one in a three part series on making a base. This part covers sculpting, part two will be painting and part three is detailing. Thank you, Grace Bogumil-Bisnath, for sharing your secrets.

P.S. I can not wait to see the finished model!

Making a Custom Base, Part One - Sculpting

You will want to begin with the following:

- A flat, non-stick, portable (if possible) surface. (I use a wood panel with plastic wrap stretched over the edges and taped to the back.)
- Sculpting tools (You can get really creative with what you use, but I just stole my husband's brand new dental toolkit. 😁)
- Your clay of choice (I use Apoxie Sculpt)
- A clear idea of flow, texture, and size of the base. Some things that may affect this are position and scale of the model, how many feet will be grounded, setting - such as an arena, or in the wilderness - etc. 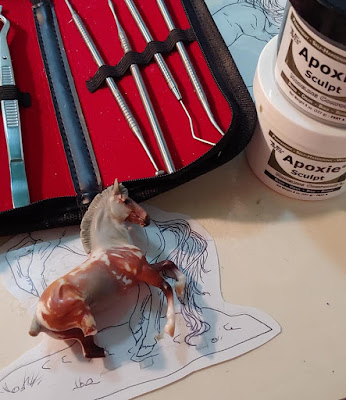 Step 1: If you are using a two-part clay such as apoxie sculpt, you will want to make sure you have equal amounts of each part - A and B. I roll each part into a ball and put them side-by-side to compare size. Once they look even, knead them together. 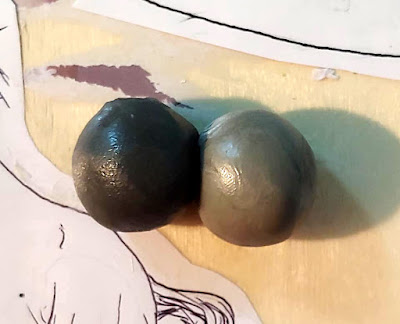 Step 2: Knead the clay for several minutes, or until it is one uniform color. It should not look marbled. If it does, keep kneading. If it is not thoroughly mixed, it will not harden properly, and the base will need to be re-made. 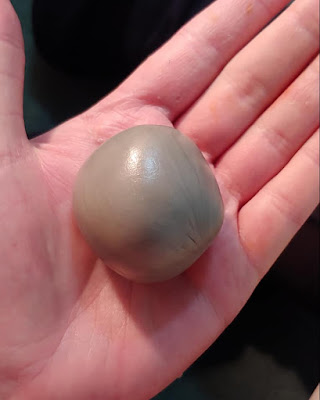 Step 3: Once the clay has been thoroughly kneaded, plop your blob onto the flat sculpting surface and begin to shape it into the general form you want. Here, I'm going for a steep river bank slope that becomes a flat plane. Use your fingers to move the clay into the desired shape - flat here, bumpy there, subtle in this place, more obvious in that other area... Once you're happy with the general form, it is time to begin sculpting some details. 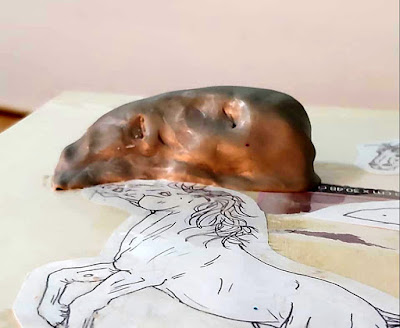 Step 4: For the details, I used these shaped sculpting tools. 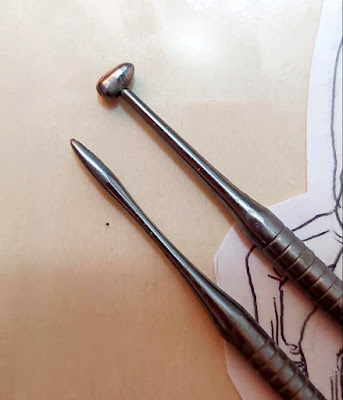 Keeping in mind that I was going for a steep river bank slope, I used my tools to shape areas that would be corroded from water, or where mudslides would have occurred. To keep it realistic, it is important to not have it look very uniform. Some areas should be subtle, and some areas should stand out more, width and direction of the crevices should vary etc. I also tried to create the illusion of areas where wildlife might have stepped before, creating small plateaus and footholds. A majority of this will be "underwater", so it will look less harsh and contrasty after that is done. 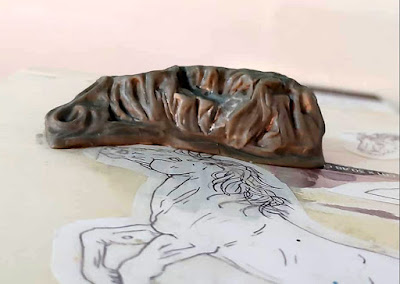 For the top, or in other words the area that becomes the flat plane, I used the more pointy tool, lightly tapping and scraping using various sides of it to create little divots and holes to mimic a muddy or sandy area. I also used another unpainted model of the same mold to make hoof imprints in varying directions. 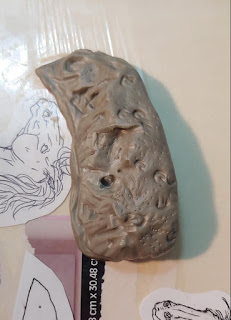 Step 5: If your model needs to be supported by the base, determine where you want your model to stand. Then, take your model and push the feet into the clay slightly. It should be just enough so that when you place it on the hardened base later, the hoof will not be buried, and the model will not tip over. My model and base will become one piece by the time I'm finished/ the model will not be removable, so I made a bit deeper of an indent than usual to mark where I want it to rest. In the end, it will be a zebra climbing up the steep slopes as it emerges from the river to escape a hungry crocodile. The hind end will be in the water feature, which we will go over later. 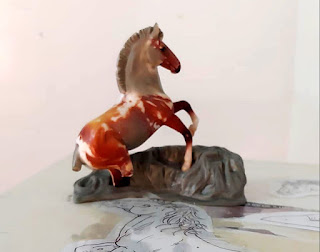 Once you're satisfied with the result of the sculpting, set it aside to cure. With apoxie, this can take twenty four hours, give or take. 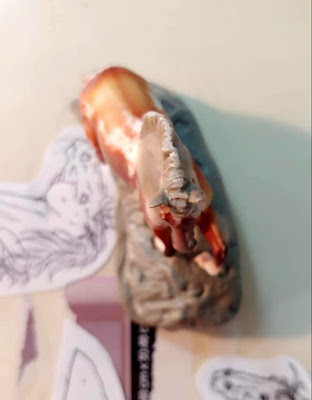 I hope this was helpful! Feel free to ask questions, share your own tips and tricks and let me know how the tutorial was in the comments.
Posted by Braymere at 2:01 PM