It's been more than five months since I got a new horse. That's not surprising, really. I have champagne tastes and a beer budget. Even in the best of times, I'm used to waiting a while between models, and the past six months have not been the best of times. First there was the unemployment, then all the holiday and winter expenses... I can't afford to buy anything outright, and I won't allow myself to take any new trades until I eliminate the backlog. As much as I'd love to have a shiny new pony, I know that's not in the cards right now.

Despite that, my mailbox hasn't been completely empty. Here's a look at some of the fun things that have arrived at my house just in the last week .

First up is this little guy. He's not mine--he's here for harness fitting purposes only. Still, it's nice to look up on the shelf and see a new face, especially when that face is as cute as this one! 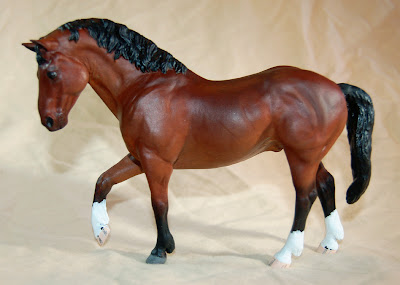 The second box of the week came from Rebecca Dunne's Griffyndoon Ropes Australia. I had won a gift certificate from her several months earlier and used it to order a set of "Progeny Ropes." 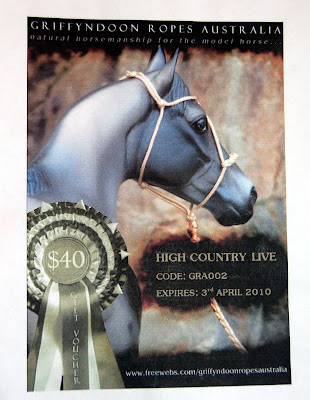 Of course new tack calls for a photo session. This is Letter to Laredo modeling the adult halter. Laredo is a Sarah Rose Lone Star resin painted by Liesl Dalpe. 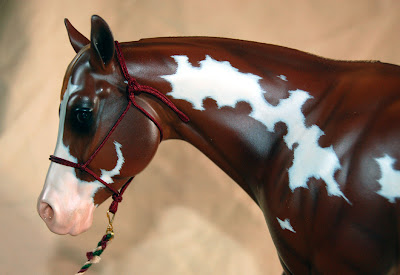 The baby halter is shown on Sweet Side, who is a Carol Williams Parrs Dream Doll resin customized by Simrat Khalsa and painted by Simrat and myself. I love the simple elegance of these halters. Many thanks to Rebecca for graciously donating the gift certificate to High Country Live! 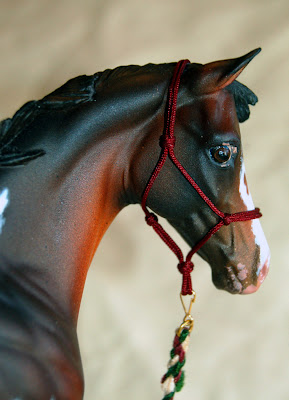 And here's what the mailman brought today--yet another model horse related package! 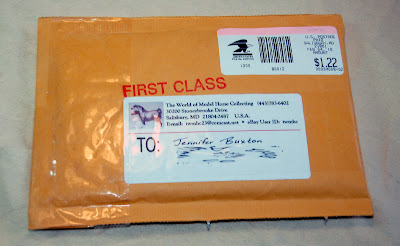 Of course, this one contains the bit I need to finish Kellye's Charro set. I suppose that means I should stop blogging, open it up and get back to work... Because you know, the sooner I get through this backlog, the sooner I can actually get back to acquiring new models!

Labels: my resins, my tack collection, Tack by other tackmakers