There are a lot of people who think performance showing is prohibitively expensive.
I disagree.
It's true that you can drop a lot of money on tack and props and dolls, but the thing is--you don't have to.  A few basic tack pieces paired with a lot of ingenuity can take you a long way.  Today's three featured models prove that point nicely.
First up is Ashley Witt's original finish Breyer donkey.  Ashley writes: I have a performance set up that you could call a bargain and a half. It’s a donkey chariot set up. Around here we have donkey chariot races and I decided to make a set up. I paid $5 for the donkey, $25 for the harness, $10 for the doll, $3 for the fabric on the doll, and some cord I found in the junk drawer. So for less $50 I made an amazing set up that has placed no less then 3rd since I’ve been showing it and against some pretty expensive set up and some big classes including beating my own expensive harness set up. He also has enough NAN cards for his merit award if I ever get around to sending them in. It just goes to show you don’t have to spend a lot of money for a really cool set up. 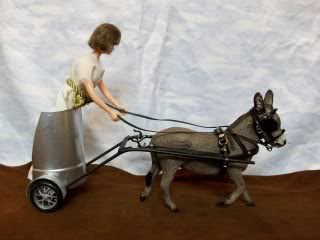 Danielle Seivers' On the Prowl is another low priced performance success story.  Danielle writes:  I collect the original Creata Winners Choice micros (from the late 1990s). I've had this micros for so long that I don't recall where Prowl came from, though I'll bet I didn't pay much at all for him. Little Prowl is a variation of the stallion from the Series 1 Quarter Horse set. (The original has cream 'dapples', while Prowl's are closer to his body colour.) He has been to many live shows over the past four or five years, and often comes away with a Champion title for his Performance entry. Not bad for a horse not much bigger than my thumb! 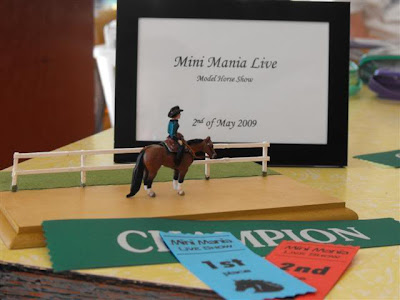 While the first two models were specialists, Susan Hargrove's Diamond Design is an all arounder.  Susan paid just $30 for this special run John Henry, who went on to win not one... 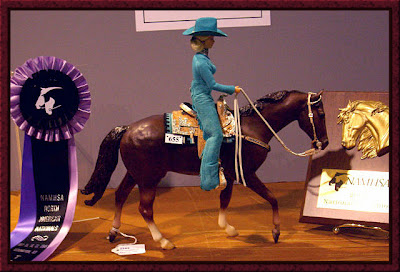 but two National Championships at NAN 2008. 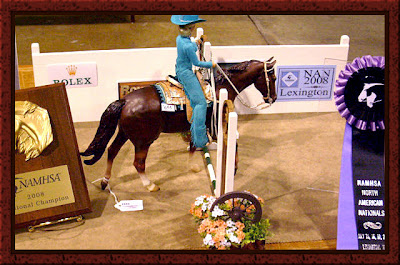 Now I realize that these are not thirty dollar set-ups.  It's obvious that Diamond's tack, rider and props cost more than he did.   This shouldn't detract from his Bargain Barn status.  Instead it points to the long term affordability of performance showing.  Susan may have spent a pretty penny assembling the components of these entries, but that's a one time expense.  The pieces of this set could be used successfully on any number of models--Bargains or otherwise--and should allow Susan to continue her winning ways for years to come!
Posted by Braymere at 5:01 PM