It's really cold. We had record setting low temperatures yesterday and so far today has been more of the same. My older son has caught his brother's eye infection so he's home from school. He's contagious, but he feels fine. He's just bored. It's too cold to play outside. There's nothing interesting to watch on tv. He doesn't want to read a book or draw. Apparently today has been so boring that he is looking forward to going back to school tomorrow.

I have so far stifled the urge to tell him what my father always used to tell me, that is "only boring people get bored." Oh, I hated it when he said that, but I do think that Ryan needs to learn to amuse himself. I already have enough responsibilities and do not need to add entertaining Ryan to my list. However, I don't mind trying to involve him in some of my projects.

Since he usually likes anything that involves tools, that PS Arab who was standing on my unpainted shelf yesterday became today's together project. We decided that we did not like the neck so out came the hacksaw. You should have heard Ryan cackling his mad scientist laugh as the neck went bye-bye!

Ryan laughed even harder when I put the head into the neck hole. He said "You need to put a picture of that on your Blog." I agreed that it was blogworthy so here's a look at poor little turtle Arab peaking out from his shell. 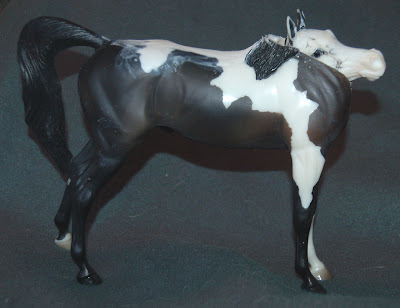 Of course, I couldn't leave him like that for long. Here he is with a temporary wire and foil neck. 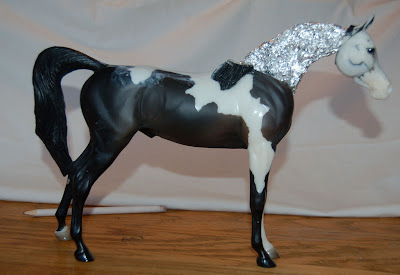 I think the general length and shape look ok, but I posted some pictures on Model Horse Blab hoping that some of the talented people there will help me fix any mistakes I might not be seeing. 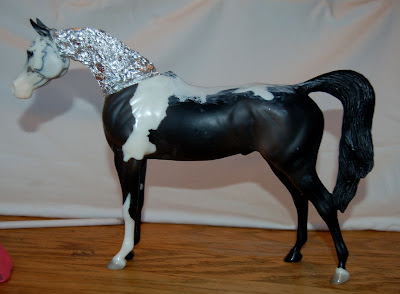 It's easy to change things at this stage, so feel free to critique away--I will not be offended!
Posted by Braymere at 12:09 PM