OK, that's not me in the picture but right now I am feeling much like Ryan did when he was first plunked down on Santa's lap--unhappy and overwhelmed. I really want to enjoy the holiday season, but I admit that a large part of me would be happy to hit the fast forward button and skip over the next couple weeks. 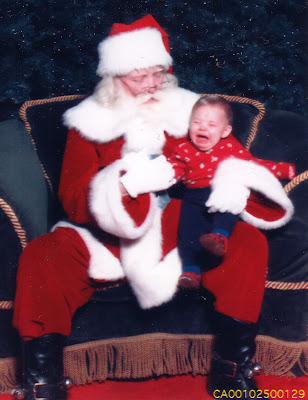 There are a lot of reasons for this. I don't like shopping and I especially don't like shopping when the stores and roads are so crowded. Thankfully, I was able to order most of the kids' gifts online but there are still a few stocking stuffers that will require going to a store. I keep putting that trip off and I know it's only going to get worse...

It doesn't help that it's cold. Winter weather wasn't a problem for me the first time I moved here. In fact, I think snow was half the reason this California girl chose to attend a Colorado college. However, that was a long time ago. The cold does bother me now, and it seems that the older I am, the worse it gets. These cold winter days with their early sunsets wear me down. I know I would feel better if I was outdoors riding a horse or walking my dogs, but it's just too darned cold.

Of course staying inside reminds me that my house is a mess. This is not unusual and would not be a problem except that my in laws are coming for their first visit in five years. I really, really, really don't want them to see it like this. I don't mind admitting that I'm a lousy housekeeper, but it's a whole different matter having people come and see the mess for themselves. I do like my inlaws and I believe Chloe when she tells me that she's coming to visit the people and not the house. Still, I feel anxious about it.

Tack production has been at a standstill for more than a week. I've sat down several times to work on various projects, but it just isn't happening. Tack making requires time and focus and I can't seem to find enough of either. I am also about a month behind on email. If you've sent an inquiry about my tack, I am so sorry and I will answer eventually--I promise!

It's not all bad, though. The kids are out of school now and it's hard to not catch a bit of their excitement. We decorated the tree today and we've made a few silly little holiday projects like this. 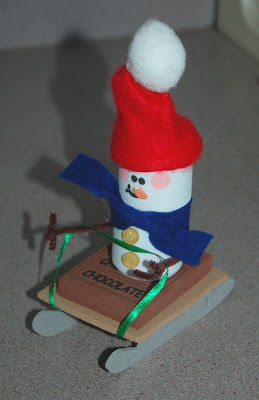 It's certainly not as interesting as a saddle, but still kind of fun!

The mailman delivered a big box today. The kids were sure it would be presents for them, but instead it was a pretty new pony for Mama. 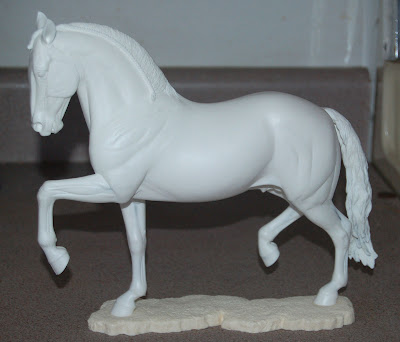 This is the new Orgulhoso resin sculpted by Dagmar Anderson. I don't usually get horsey things for Christmas, and in fact, this is part of a tack trade rather than a present. Still, he feels like a Christmas pony. Isn't he pretty? I think I'm going to tie a big red bow around his neck and put him under the Christmas tree. Maybe that will help my holiday mood!
Posted by Braymere at 1:00 PM

Labels: my family, my hobby life