I may be a fast tack maker but I'm a sloooow customizer. Usually it's years between the time I start a project and its eventual completion. Of course that's assuming I ever do finish it. There are a few horses buried deep in my body box that will probably never again see the light of day...

The Turtle Arab, however, looks like it might be a rare exception this rule. No matter how many times I put her back on the project shelf, she keeps finding her way upstairs. I have so many other things I should be working on. My in laws will be here next week and the house is still a mess. I haven't finished my Christmas shopping and I still need to wrap the presents I have bought. I really should not be wasting time on a plastic horse, so of course that's exactly what I've been doing. 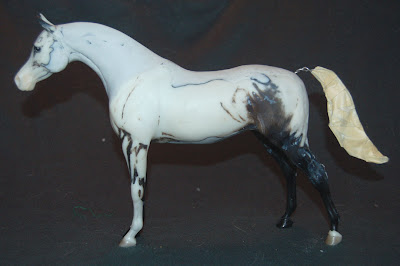 Aside from the new neck, there's been a sex change, a tail removal and a butt reduction. I'm tried to give her more substance through the heart girth by adding to both her topline and underline. 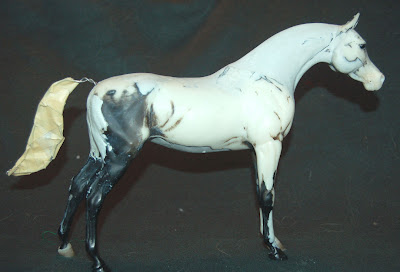 So far I'm pleased with the way this is going. There is still a lot of work to do (especially on that hind end), but she looks prettier to me now than she did in her OF state. Since I still own every model I've ever customized, that's what matters to me the most.

Now if I could just stop thinking of her as "the Turtle Arab"! Poor girl, at this rate she is doomed to be named Bint Tyrtyll or Tyrtyllina or something equally ridiculous.
Posted by Braymere at 12:10 PM