This fun show featured a spoopy themed, ten class performance division. I intended to enter at least one full set of seasonally appropriate photos, but alas, time got away from me. Instead, it was mostly the usual crew with their usual photos. The first class was Spooky Showmanship. Once Upon a Time was my top finisher.

She came back strong and won the next class, Deranged Dressage.

Creepy Costume was next. Peanut Gallery was second best here.

After that, it was Possessed Pleasure. This one also went to Once Upon a Time.

Flying Phoenix won Frightening Fences. Once Upon a Time was second.

One of the only pictures I did manage to take specifically for this show was Octopurdy's Scary Stockwork entry. I was very pleased when this one placed first!

By this point in the show, Dun Up Purdy had quietly racked up a lot of points. He was third in Creepy Costume, second in Scary Stockwork, Fourth in Horrifying Harness, third in Terrorizing and had a pair of Honorable Mentions for Possessed Pleasure and Frightening Fences. He had not yet won a class, though, so I was really pleased when he got the top nod in Psycho Patternwork.

The last class of the division was Oogy Other Performance. This one went to Jennibray. 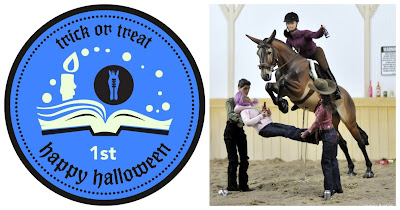 It was really close, but Dun Up Purdy just nosed out Danielle Feldman's lovely Hollywood Bling for the Performance Championship. 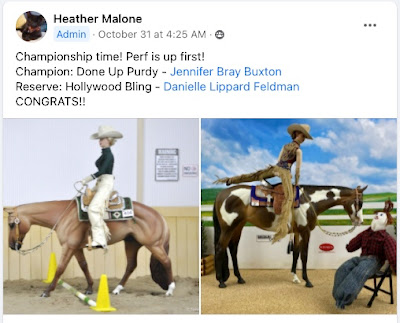 He was also named Best in Show. See, Tiffany? He really is the best old horse. 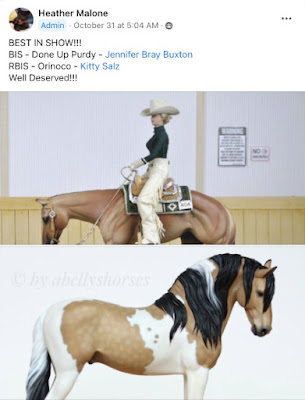 Almost as exciting - Heather gave Jennibray one of the coveted Judge's Choice awards.

Thank you, Heather and Jackie, for another really fun photo show. I am already looking forward to next year's competition.