Five years ago today, the horse I was riding fell over a jump and landed on top of me. My right collarbone shattered on impact, and I sustained a lot of damage to my left leg. It was a bad wreck by almost any standard, but considering what could have happened, I got off easy. For a few terrifying moments, it had looked like it was going to be a whole lot worse.

That was the second scariest experience of my riding career.

The scariest experience - the one where I was absolutely convinced I was going to die - happened when I was twenty and working at the Don K Ranch in the mountains outside of Pueblo, Colorado.

I had taken a group of riders on the Edge of the World trail. This was our marquee ride, with fantastic, panoramic views of the forest... 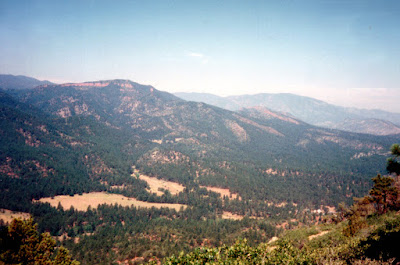 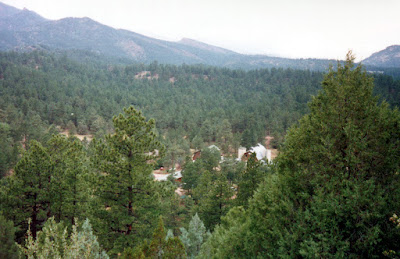 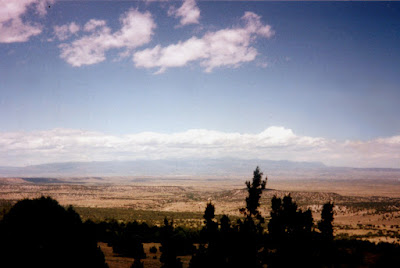 The ride finished up in the grasslands west of the ranch. From there, we'd go through a gate, and make the long trek up the Don K driveway. 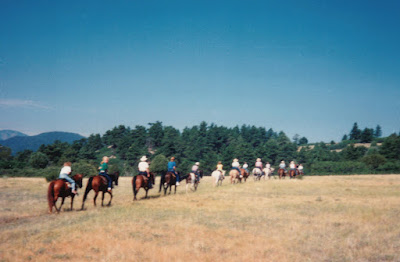 My mount that day was a black gelding named Star. He was a nice horse to ride, kind, willing and responsive to the aids, but also very reactive. If there was something to spook at, he would be the horse to find it. Some weeks we had guests who were confident and secure enough to ride him, but more often than not, he was a wrangler horse. 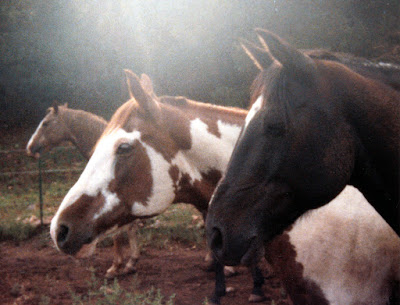 As we neared the end of the ride, I dismounted to open the gate between the pasture and driveway. The other riders passed through and continued on a ways before stopping to wait for me. The space between us wasn't tremendous, but it was enough that no one was paying attention as I closed the gate and went to climb back onto Star.

Because he was tall and I am short, I did what I usually did and used the nearest big rock as a mounting block. Unfortunately, this particular rock wasn't a stable platform. It toppled out from underneath me as I pushed off. I tried desperately to save myself, but fell backwards and landed with a whomp!, flat on my back, left foot wedged firmly in the stirrup above me.

"This is how people die," I thought as I closed my eyes and braced for the inevitable. In my mind's eye, I could see terrified, spooky Star dragging my battered and broken body all the way back to the ranch.

I waited several long seconds that felt like minutes. Nothing happened. I opened one eye and saw Star's hindquarters quivering above me. Every joint in his legs was compressed like a coiled spring, and the skin above his flanks was twitching.

But he did not move.

Very gingerly, I tried to dislodge my foot from the stirrup. I was afraid to bump his side, afraid to breathe, afraid to do anything that would set off that very spooky and reactive horse.

Still, he did not move.

And then - just like that - my foot fell out of the stirrup. I took a deep, shaky breath and stood up. I went to Star's shoulder, leaned against him, and together we took a moment to catch our breath and calm our racing hearts.

Thank you, Star. You're the best horse, Star. I love you, Star.

When we'd regained our composure, I gathered the reins and led him forward to where the rest of the group was waiting. I mounted - from the ground - and the ride continued as if nothing had happened.

And really, nothing had happened.

Except I knew - and Star knew - that it very nearly almost had.