The first time I ever heard of Charlotte Pijnenburg was right here on my own blog.

That was back in 2011, when my friend, Erin Corbett, was living in the Netherlands.  While she was there, she hosted a big American style live show in Leeuwarden.  One of the showers, Anne Van der Weel, wrote a guest post about the show that included lots of photos.  Naturally, my eye went right to the pictures that included tack, most of which had been made by Charlotte Pijnenburg.  I added her name to the "up and coming tackmakers" file in my brain.

Two years have passed since then, and despite her young age, Char is no longer an "up and comer."  She's here and she's good.  I hope you'll enjoy reading her story as much as I did!

Jennifer asked me if I would like to write a blog for her, and even though I’m very happy that she asked, I’ve been very busy with some exams, so it took a while until I had time for it. But now the time is here!

Well, let me introduce myself. I’m Charlotte Pijnenburg, and I live in The Netherlands. I’m twenty years old, and I’m studying Applied Biology (almost done with that!). I still live at my parents, but I’m eager to leave and have my own place again (which I had for a couple of years, but I recently had to give that up because my studies are almost finished).

At home, we’ve got two dogs, Sjakie and Chester. Chester is my big friend, I love that dog with all my heart. We train obedience and agility every weekend, and even though we’re not very good, we love having fun together!
I’ve been collecting model horses for a long, long time.  I think it started as soon as I was allowed to go to the toy store on my own, at age 10 or so.  At first it was the Lego horses and then Playmobile horses.  When my pocket money was a bit higher, I realized that Scheich horses were pretty cool, too, and I started collecting them. That is where the creative stuff began!

I’ve tried several things. When I didn’t like a horses colour but I did like the mold, I just repainted it. It became a bit of a habit, and I’ve repainted several pretty rare models (whoops!!).  Painting wasn’t really my thing though, because I had to wait so long for the paint to dry.
Then I discovered the rubber tack that was for sale for the Schleich horses. I bought a set, and I was super happy with it. It looked so cool when a model horse was tacked up! The down point was that the tack was very expensive for me at the time (20 gulden, that was like a month of pocket money) so it was hard to give all my horses tack.  I tried some things, and when I found elastic thread, I started making my own bridles! And with felt I made the saddles. It worked out great, I was able to give my horses cheap and (in my opinion) prettier tack now! Here’s an example of one of my “very professionally made” sets (I was super proud of it, lol):
At this point, I discovered the internet, and it wasn’t long before I found a forum for model horse collectors! And not only that, there were also tackmakers there, can you believe it?!Well, I myself could hardly believe it at that time.  That's also when I discovered Breyers, but I thought they were ugly.  LOL, look at me now, with a cabinet full of Breyers!
This is when I started doing customs, but I had the same problem there as with painting.  It took so long for the epoxy to dry! I did make some nice customs, but because of the drying issue, I didn’t really do it a lot.
Because I had some competition in tack making now (the other tackmakers on the forum), I started to develop my tack making skills.  After a year or so I went to my first live show.  That inspired me even more to make my tack sets better, because I wanted to win!
After a while I bought my first Breyer (Bouncer, I still have him!) and then there was no stopping me! Now, five years after I joined the forum, I’m still a tackmaker and I own three cabinets full of Breyers, Peter Stones and more and more resins. I have a very long waiting list with people who like my work and want to own tack made by me. I also have my own Facebook page with over 500 likes! I’d like to say that I didn’t even dare to think I’d ever be so successful, but in fact, I’ve been hoping it ever since I discovered that there were so many model collectors in the world!

So, there you have it, my model-horse-history. Now here are some pics of my current tack creations, I hope you’ll enjoy them!

I love making “different” tack. This is my British dressage set. 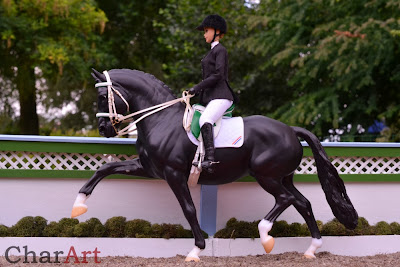 And here’s my blue accented western set. I’m really fond of using colour in my work! 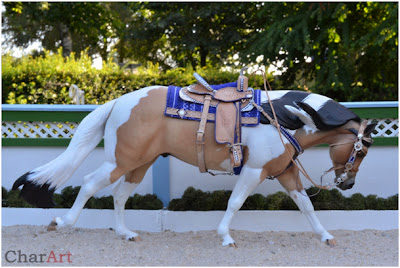 Many people like my Portuguese sets! I get a lot of orders for them, so it’s a good thing that I really enjoy making them, too. I think they are the PERFECT combination between elegant and tough looking tack! 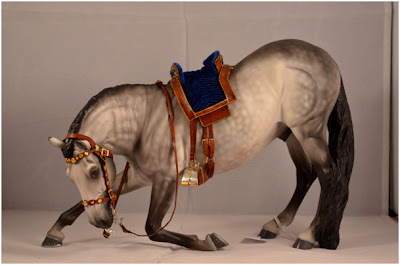 And of course harnesses. I drive with horses in real life, and even have my horse-driving license. I know very well how the tack is used, what each part of the harness does  and how it should be adjusted to hang correctly on a horse.  All of this is visible in my harnesses, and in how many prizes they win at shows! 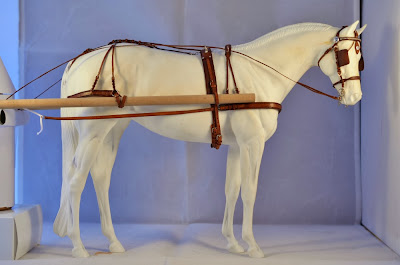 Rope halters, they are so much fun and so frustrating, too! I enjoy making them and seeing them on horses and models alike, but they are hard to make! 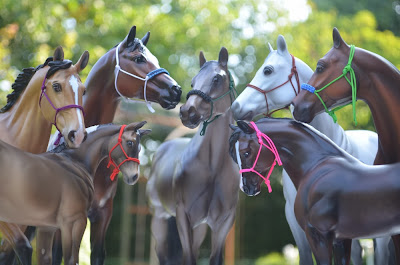 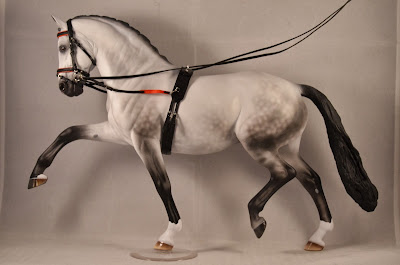 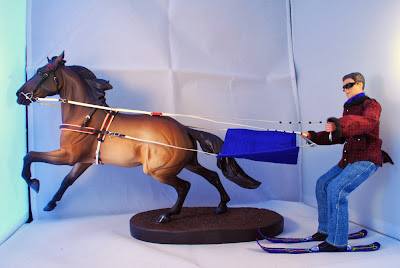 Well, I can continue like this forever, but I think the blog is long enough now! I hope you guys have enjoyed reading it, and please visit my website for more pictures of my work or follow the CharArt page on Facebook. 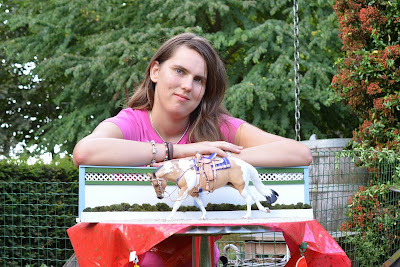 Thanks for being patient enough to read my story, haha!

Thank you, Char, for taking the time to share your hobby history.  I sincerely hope I was one of the tackmakers that inspired and challenged you to hone your tackmaking skills!
Posted by Braymere at 2:14 PM