A guide to stitching leather

If you make model horse tack long enough, sooner or later someone's going to ask you to make something "just like that" for their real horse.  Mostly they're kidding, of course, but every now and then, you get the feeling that perhaps they aren't.  And when you're walking up and down the aisles of the Leather Factory and looking at all those huge straps, it might occur to you that it would be fun working on something that big.

The temptation to scale up is hard to resist, and I do know a couple model tackmakers who have at least dabble in full scale work.  British hobbyist, Corrie King, has taken it one step further--she's studying to be a saddler!  In today's guest post, she shares a little bit of her full scale tackmaking knowledge.  Thanks so much for taking the time to write this tutorial, Corrie.  I know I won't be the only person who finds it utterly fascinating!

A Guide to Stitching Leather

As an avid reader of this blog and someone who has also experienced a broken collarbone from a fall, I felt I ought to help out and have a go at writing a guest post! I’m currently training to become a saddler, so I thought I might share a little about how to stitch leather – and it’s trickier than you think!

First of all, since most of you won’t know who I am, I ought to introduce myself. I’m 16, from Peterborough, England, and have always loved making things. I always had model horses when I was little, but was given my first Breyer when I was about 8 and a few years later discovered the miniature tackmaking hobby (and this blog of course, from which I’ve learnt a lot!). I found I had a passion for making model tack and trying to get it as realistic as possible, and slowly developed my skills. So, I decided to take it a step further and about 18 months ago applied for a place on the saddlery course at Capel Manor College in North London. I was lucky enough to eventually get a place on the course. I finished my GCSEs in June this year and started the course this September. I’m loving it so far and have already learnt a lot – I’ve made a foal slip and headcollar so far and am now half way through my first bridle!

In this post I’m aiming to give a step-by-step  idea of how to do double-hand stitch (that is, stitching with two needles at once). A good stitching technique is the foundation for good items of tack and other leather goods, so I reckon it’s a good place to start!

The first thing I do is stitch-mark with a pricking iron. 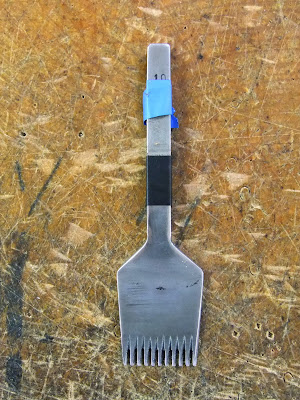 This tool is used for marking out where the holes for stitching will go on a piece of leather, and making sure they even and straight before you even pick up a needle. 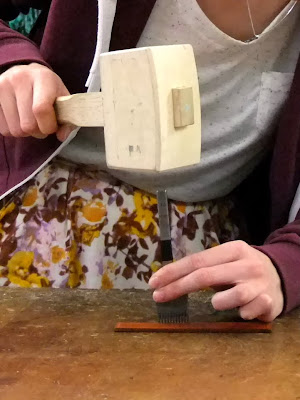 For this demonstration I am using a 10 to the inch marker since it’s the one I use most often on my work. 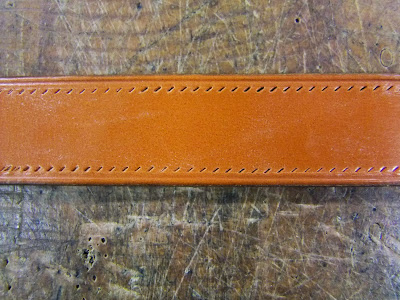 The next thing I do is prepare the needles and thread. I’m using linen thread, of thickness 3/25 to match up with the number 10 stitch marks (3/25 refers to the number of strands twisted to make the thread and how fine those strands are). One arm span of thread is enough, otherwise it is difficult to work with and it’ll get confusing! From the centre of the piece of thread to one end, I run it through a block of beeswax until it feels sticky to touch, then I wax the other half in the same fashion. I run the thread through my hands a few times to remove any excess wax and slick down the thread. The wax helps to waterproof and rot-proof the thread. 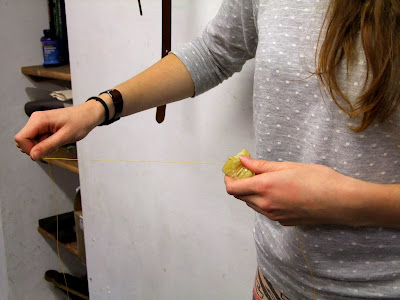 Next, I thread a needle onto one end of the thread, pull the tail through about an inch and pierce the thread twice as shown to make an ‘S’ shape. 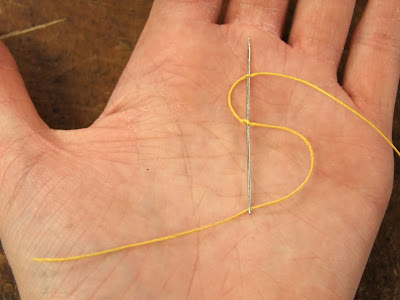 The pierced area of thread is then pulled down over the eye of the needle. This locks the thread onto the needle so that it stays put when stitching. Then I repeat the process with the other end of the piece of thread and an identical needle. 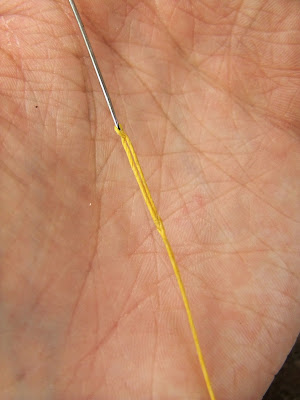 Now it’s time to start stitching! I use a pair of stitching clams like these to hold the leather so that both hands are free to stitch. They are held upright between the legs when sitting. A piece of soft leather glued flesh-side (backside) out on each of the jaws prevent any work from becoming marked. (In the later photos you will see that the jaws of the clams are covered in cling-film, which I have been using to prevent white stitching on my coursework from getting dirty!). 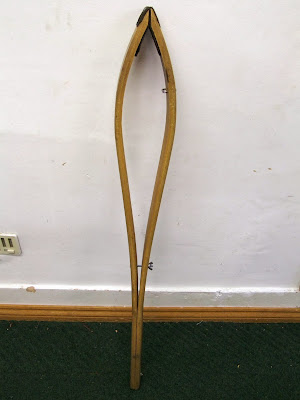 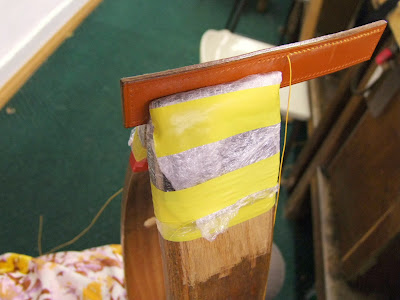 It’s important to hold your stitching awl correctly so that the hole is made at the correct angle to get the pitch (slant) on the stitches. 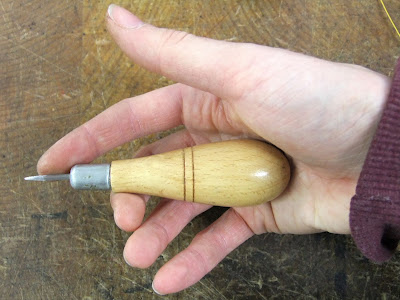 The awl should rest in your palm with your index finger on one of the sharp edges (imagine it is a tiny dagger blade) and the flat side facing towards you and upwards. 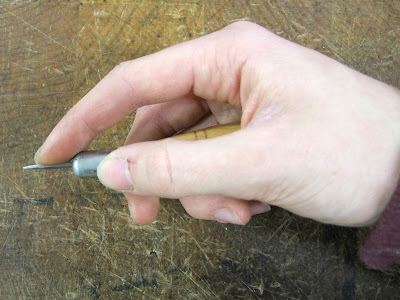 (I would usually start with a backstitch to secure the stitching, but I’m skipping that part for this tutorial). With my awl I make a hole in the first stitch mark. 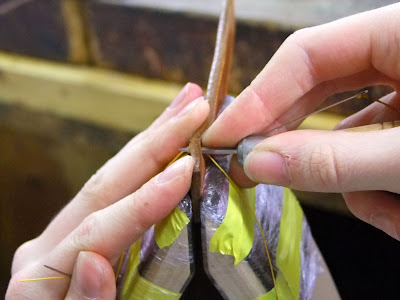 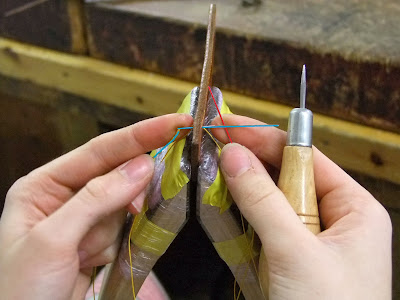 Pull the blue thread down and towards you with one hand pulling the thread each side of the leather. At the same time insert the red needle into the hole. 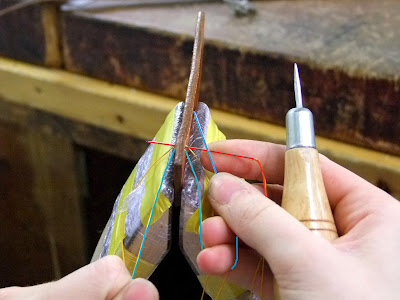 With the red needle still sitting in the leather, pass the blue thread over the top of the needle. This is called the ‘throw over’. 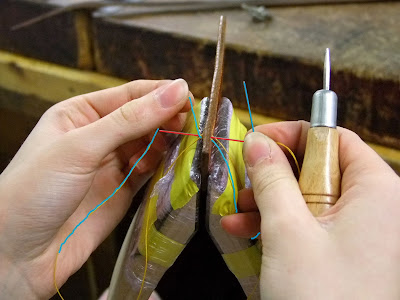 As the thread is pulled tight, pull the red needle upwards and the blue needle downwards - this helps to create a pitch (slant) on each stitch. 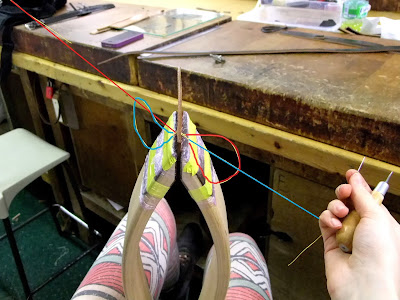 That’s one stitch completed! It’s quite confusing at first, but after a while it comes quite naturally. The stitch-marked side usually looks very neat... 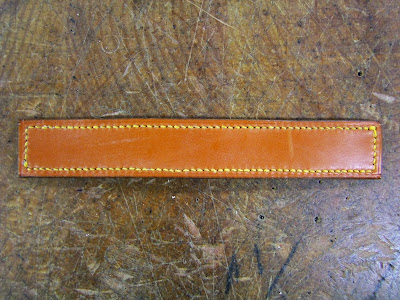 but it’s not easy getting the back to match – especially when stitching 2 or more layers of leather! I was stitching through one layer for this tutorial, so it looks pretty good on the back this time. 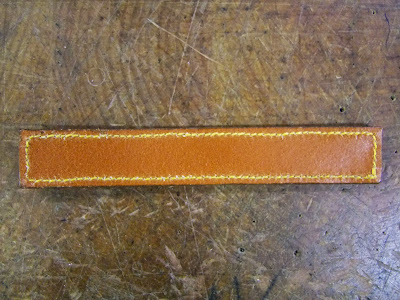 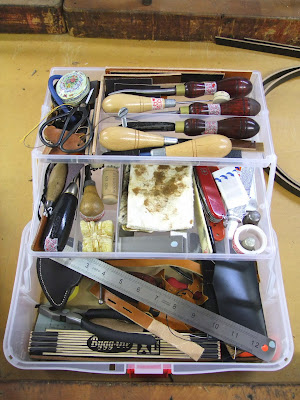 I hope this has been interesting reading, I certainly enjoyed writing it! If you have any questions I’d be happy to answer them in the comments below.

Thanks again, Corrie, and please share pictures of your finished work.  You know we all want to see it!
Posted by Braymere at 11:01 AM