Today's guest post is a tribute to one of the hobby's longest-term and best-know friend couples, Liz Bouras and Paula O'Keefe. Thank you, Christie, for sharing their story, and thanks, also, to all the hobbyists supporting today's Tally-Ho Model Horse Show in Leesburg, Virginia.

by Christie Richardson, with help from Katie Hail-Jares

Paying it forward and taking care of one another is one of the cornerstones of this hobby—an attribute that Elizabeth “Liz” Bouras and Paula O’Keefe have exemplified over their forty year involvement with model horses.
Earlier this spring, however, Liz and Paula found themselves in need. The two roommates were diagnosed with cancer in the same month. Friends, hobbyists, and fellow artists rallied to support the duo organizing a benefit show, Tally Ho.  The show will take place this weekend in Leesburg, Virginia and will include a silent auction and raffle, with all proceeds benefiting Liz and Paula. 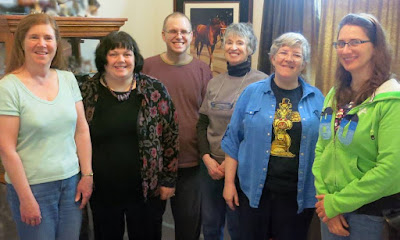 Beyond just organizing and hosting a benefit show though, friends (like myself) wanted to put into words how much Paula and Liz mean to us and this hobby. Jennifer graciously allowed me to usurp her blog to share a collection of those stories and chronicle why Liz and Paula are important to this hobby, and gosh darnit, just wonderful people.


Liz Bouras has been painting horses for over forty years under the name Amarna Productions and has recently been a featured artist in Copperfox’s magazine.

She specializes in beautiful, intricate star dapples, but does deep, luscious shading in any color or scale (as long as they don’t have spots!). She holds a BA in Fine Art and has won numerous awards, including being a finishwork finalist in Breyer’s inaugural Best Customs Contest.
Paula O’Keefe has been prepping for Judy Renee Pope from the very beginning. She also crafts stunning miniature studies of period Native American regalia. Every single detail is researched and executed, right down to the proper protective herbs to go in miniature medicine bags, which every model receives.
It is probably best to allow the photos to speak for themselves.
My own introduction to Liz and Paula centered around pony trafficking. I purchased a gorgeous dapple grey mini Cromwell from Liz in January of 2015. Liz no longer showed, but offered to have Shay Canfield drop him off to me at a show. In the time since then I have, in turn, trafficked many ponies for them and have become great friends while doing so.
One of these ponies was a mini Khan. It turned out that Liz and I work approximately a half mile from each other, so we met for lunch and more pony trafficking. At the time, I had about an hour and a half commute one way into work, through some of the worst traffic in the country and was looking to move closer. Having lived in the area for thirty years, Liz suggested several apartment complexes and, a few months later, we were neighbors. Perhaps this isn’t a very profound statement for most people, but six months before I had left the Peace Corps due to medical reasons, and I was grieving my loss of community. The model horse community filled that void. Paula and Liz were at the forefront and gave me a family back. 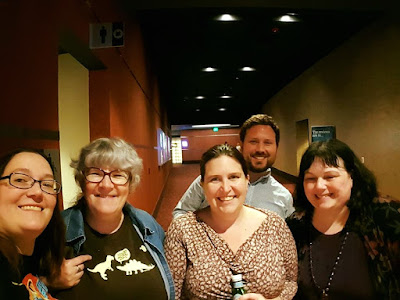 Liz and Paula’s apartment is a mini museum of model history, with jaw dropping chinas, gorgeous works by Judy Renee Pope, and “what’s left” of Liz’s tack collection—a feat I might be able to equal if I keep collecting tack for the rest of my life.  The combined collection is so noteworthy that esteemed tack-maker Donna Allen once jokingly referred to it as the Bouras Gallery. And it is true—beyond the models, there are rarities displayed on surface; rare records, movie errata, Gothic and punk artwork, and Paula’s intricate ball jointed dolls. Their apartment is a treasure trove of goodies and both Paula and Liz have so many stories to share from lives well-lived.
As I got to know them both better, I learned that they were missing a third of their trio—Judy Renee Pope, Paula’s partner and Liz’s dear friend had passed away in 2007. However, Paula and Liz continue to keep Judy’s spirit alive in all they do today.
Paula and Liz have a network of friends and acquaintances, whom they stealthily connect with one another. They actually spent a while trying to connect Katie Hail-Jares and myself before Betsy Andrews seated us together at MAR. Here’s Katie’s story:

“When I rejoined the hobby as adult, I was drawn to collecting customs and resins, models I had been unable to afford as a teenager. Among my first purchases was a running shire SM customized to a rolling horse. I snatched him up, and immediately started looking for an artist.

I don't remember how I found Liz but I did. I inquired about her prices and sent her a color suggestion. She included me as an (overeager) creative partner in this process, bringing nothing but enthusiasm. I was so excited to own my first professionally commissioned model. When the piece arrived. Liz reached out to let me know the sculpting was brittle and kept breaking. She repaired, as she was able, and kept me updated. She insisted given the problems in sculpting quality that I not pay.

Anyone at that point could have forgiven Liz then for doing a rush job. Get this pity-job monstrosity off her desk. But she didn't. She did a gorgeous and detailed job. "Might as well lipstick that pig," she wrote me.
I ended up picking up "Piggy" from Liz in person. And again, her integrity, love for the hobby, and joy shown through. She welcomed me into her apartment, where I met Paula. Together they showed me incredible pieces if model horse history.

Over the next two years, Liz and Paula opened their home repeatedly to announced and unannounced visits, always welcoming me and providing me so much information and knowledge. When I think of the quintessential hobbyists, I think of Liz and Paula-- sure of their craft and so eager to share it. I can only hope someday I have the chance to pay forward that same gift that Liz and Paula gave me years ago--a sense of community within a hobby I had given up.” 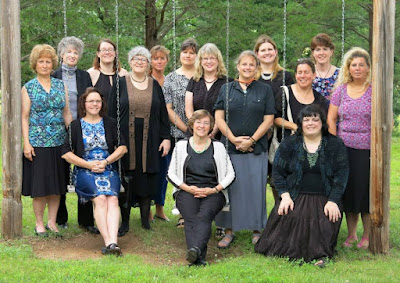 Beth Hoffert has known Liz, Paula, and Judy for years. The four became fast friends, and Liz and Judy were even involved in Beth’s learning how to paint. Beth has many memories of the four of them together, but shared a few of them with me.
“I knew Liz, Paula and Judy for a few years before I actually started painting. They were totally supportive. After I had started getting good at painting, they came up for the weekend. Judy told me, with Liz grinning evilly over her shoulder, that I was going to learn to use an airbrush. Well, we had a blast. Then it became evening, Judy and I started doing shots, the painting became worse. It was Judy's idea! Liz didn't drink. And never has. But I think she just got goofy like Judy and I.

Once, I bought one of Liz's Arabs and she painted it special for me. Instead of shipping it, they all came to my house. That just blew my mind. Greatest gals ever!”
It says a lot about their personalities that these are all of the group photos that could be pulled sneakily off of Facebook. They speak to the hobby through their work. In forty plus years, they’ve written a novel of epic proportions.