Assuming you can't afford to spend $17,000 on an artist resin... Does that mean you shouldn't  bother attending another live show?  Is live show success completely beyond your grasp?  Should you trade in your models and take up a less expensive hobby?
My answer to these questions is an emphatic no.
Granted, the big budget collectors will always have an advantage, but that doesn't mean you can't win big with a bargain horse.  I've done it and I know I'm not alone.  In fact, I would wager that nearly every long time shower/collector has a couple members of the "Bargain Barn" in their herd.
Here's one of my most successful bargains.  This is Gimme S'more.  He is a Sarah Minkiewicz-Breunig Brownie resin painted by Cara Barker-Yellott. 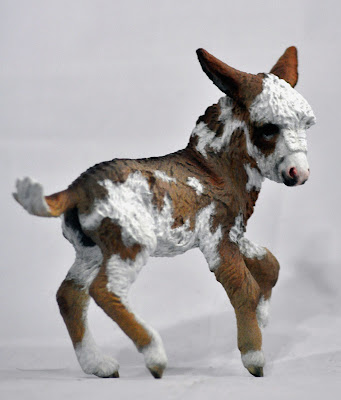 My friend and fellow tackmaker, Erin Corbett was Gimme S'more's first owner.  She purchased him through an eBay auction in which he sold for the same price as an unpainted Brownie.  Now, that was not a good deal for Cara, but it certainly made Erin happy.  She was even happier when he went on to win a Top Ten ribbon at NAN 2009. 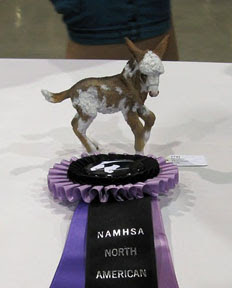 Late last year, Erin decided to downsize and Gimme S'more ended up living with me.  Once again, he "sold" for a bargain price--if memory serves me correctly, I traded a saddleseat saddle for him.  He made his second NAN appearance in Tuscon, and this time he did even better winning a Reserve Championship in the Artist Resin Other Pure/Part/Grade Foals class. 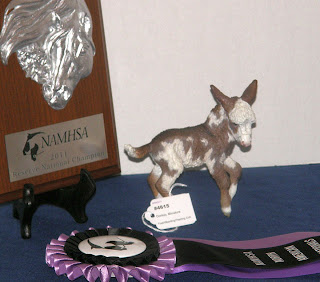 Gimme S'more has become one of the most reliable NAN card winners in my show string--not bad for a painted model who sold at body price! 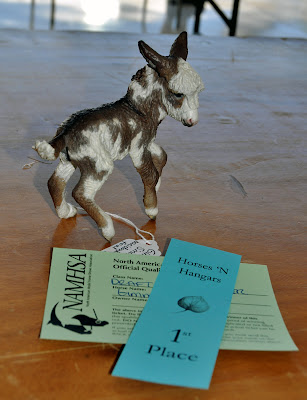 I would love to hear about some of your bargain horses.  I don't care if it's a $10 Walmart OF with two NAN titles to its name (hint, hint, Teresa!) or a Carol Williams piece that sold for $400 rather than $1,400.  Either way, a bargain is a bargain and this hobby is full of them!  If you would like to see your model featured in a future Bargain Barn post, please email me off blog at Braymere@comcast.net.
Posted by Braymere at 6:14 PM