The saddle I'll be making Tiffany next week is not the first saddle I've given away. In fact, it's the third. The first free saddle went to my friend Regan.

Several years ago, Regan ordered a Portuguese saddle set for her Vizcaya resin. Even though I had NO IDEA how I was going to make it, I let her pay me in advance. Big mistake. I made the bridle and breastplate right away, but the saddle scared me. I didn't know where to start. I bought materials and looked at reference pictures. I sketched out the different parts and looked at more pictures. Still, the light bulb did not go on over my head. I tried to force it and got nowhere. Eventually I put everything aside and moved on to other, easier projects. A year passed...

Regan and I do not live next door to one another, but we go to the same model shows and we were riding at the same barn. As even more months slipped by, I found that guilt was making me want to avoid Regan. This was bad because I like going to model horse shows, I like riding and I like Regan. Something had to be done. I was still completely blocked in regards to the Portuguese saddle so I made her a dressage saddle instead. Free. 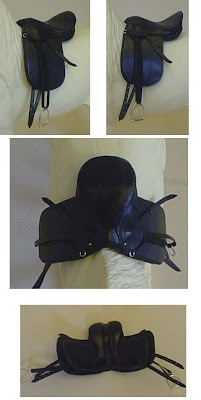 This was the first dressage saddle I'd ever made, and I was incredibly proud of it. Even after all this time, I think it looks pretty good.

I finally finished the Portuguese set in early 2007. I kind of had to. It was that or make her a free huntseat saddle! 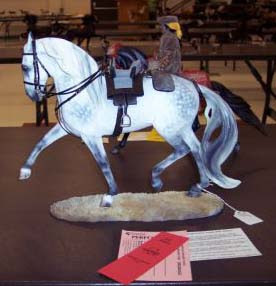 I also made a free saddle for another hobbyist last December as part of Model Horse Blab's Secret Santa gift exchange. If I remember correctly it was a classic saddleseat saddle much like this one. 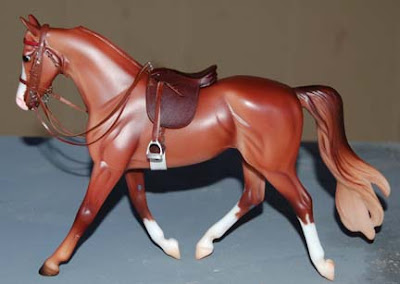 I didn't sign up for any model horse gift exchanges this year. I was worried I wouldn't have time between the holidays (my in-laws are coming!) and my tack commitments. I'm regretting that decision a bit now. Those exchanges are always so much fun, and as I've been cleaning the house in preparation for holiday visitors, I've found all sorts of model horse goodies that I can happily live without. Keep an eye on this space. I'll probably post some of them here in the next couple weeks.
Posted by Braymere at 8:15 AM