The BreyerFest Best Customs Contest is held in conjunction with the Artisan's Gallery and is an elite competition featuring work by some of the hobby's best artists. It is probably BreyerFest's most watched contest, but it's not the only contest.
Today's post is all about one of BreyerFest's other contests, the Diorama Contest. This competition is open to all three day ticket holders, with four different age groups (10 and under; 11-14; 15-19; and 20 and older) to encourage youth participation.
Each diorama must include a Breyer model of any scale,  and the entire diorama must with fit within a twelve inch cube. Since everything is virtual this year, contestants were required to include a ruler in some of their entry photos.
In keeping with the Celtic Fling theme, entrants were asked to create scenes from Celtic mythology or the early history of Great Britain or Ireland, specifically the years between 300 BCE and 1300 CE.
The British Isles have a deeply-rooted equine history, so that gave entrants a lot of options. This is Isabella Rutherford's diorama depicting “The Ride of the Dullahan.” 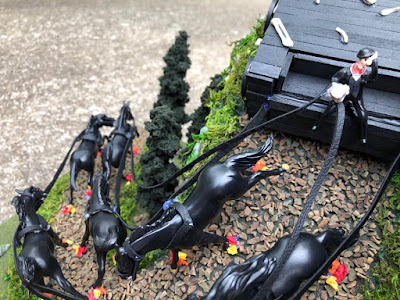 She writes: Believed to be the embodiment of Celtic god Crom Dubh, the Dullahan's purpose is to take as many souls as possible with him to the afterlife. He often appears in the form of a carriage pulled by six black horses, who are said to gallop so swiftly through the Irish countryside that fire emanates from their hooves. The carriage consists of wood from coffins and bones from the lives he's taken. In order to take these souls with him, he holds his severed head high in the air and rides with purpose, for he knows no gate can keep him out. 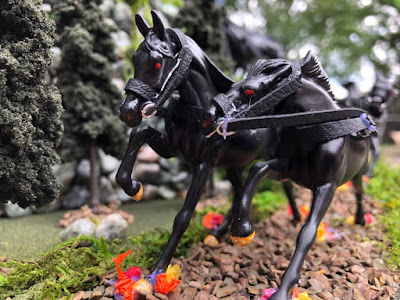 Karon Alpin's entry represents the Celtic Wheel of the Year, with the models interpreting the eight seasons and celebrations: (from top) Samhain, Yule, Imbolc, Ostera, Beltane, Litha, Lughnasadh, and Mabon. In the center is Cernunnos bringing harmony. 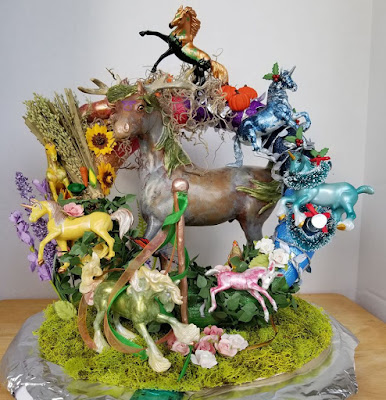 This is the Picts traveling with pilfered goods by Ellen Yanosky. 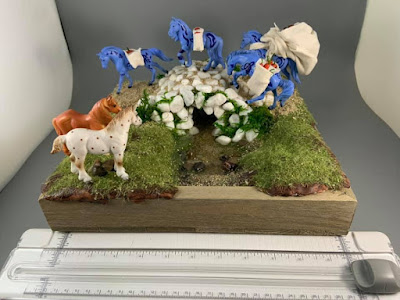 Remember Enbarr of the Flowing Mane? Here he is again, this time by Tim Justice. 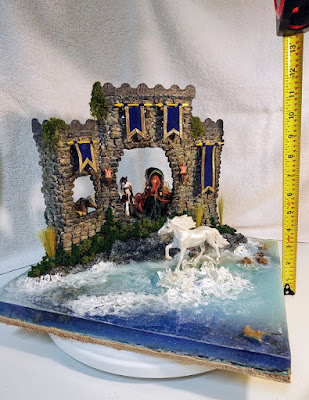 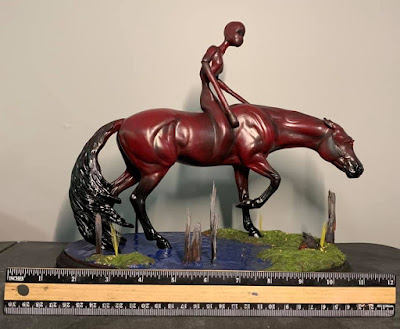 In case you don't know - I didn't - that’s a human/horse hybrid that is often blamed for bad crops. It’s skinless, with one red eye and long arms. 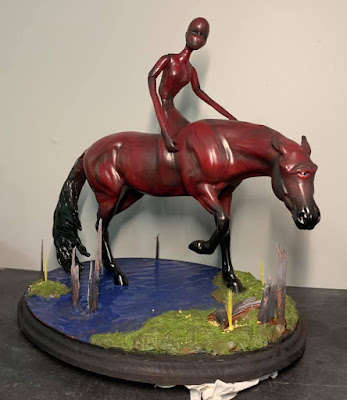 Layla Bakhtiari's entry is the Morrigan, Discord, War, and Death. 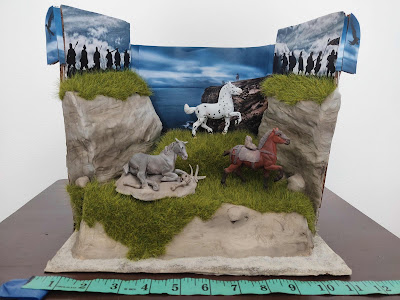 She explains: The Morrigan, or “Phantom Queen” was both a single deity and the triple goddess. She was associated with discord, war, and death. The Morrigan was a shapeshifter and took many forms, including a raven and other animals. She was also said to circle battlefields as a conspiracy of ravens to carry away the dead. 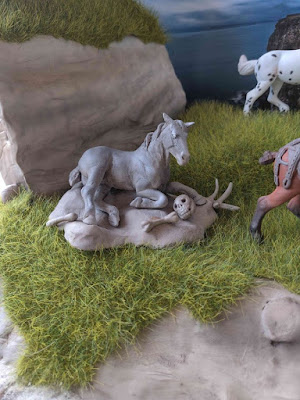 My entry includes three horses in the middle of a battlefield to represent the Morrigan’s triple goddess nature and each embodies events that surround battle. Discord is rearing, with an open mouth and wild eyes-he is the embodiment of conflict. War is symbolized by the strong trotting warhorse with full armor inspired by historical barding. Death is represented by the final horse, lying down among bones and portraying death as the final rest. 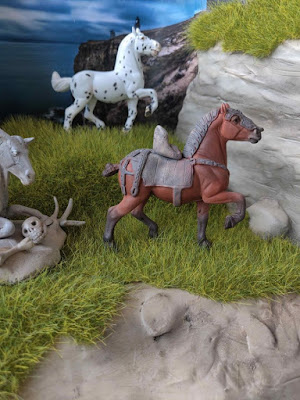 Thank you, Jodie, Elena, Deb, Isabella, Karon, Tim, Erika and Layla! I'll have another batch of Diorama Contest entries in parts two and three of this series.
Posted by Braymere at 12:08 PM