I do not collect unicorns, Pegasus's or any other fantasy horse-like creatures.  I prefer my horses to be, well, horsey.  As far as I'm concerned, the basic form is perfect as is.  No alterations are necessary, and the addition of horns or wings seems both unnecessary and mildly ridiculous.  I have never seen a fantasy model that I wanted to own...  at least not until today!

This is Prowler.  He was created by Cindy Evans of Knight's Tale Studios. 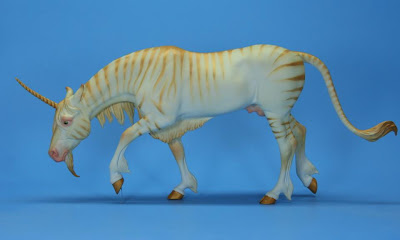 Although Prowler was just finished this week, he's been in the works for more than seven years.  He started life as a sketch... 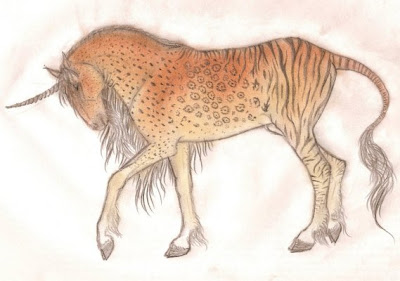 but it wasn't long before Cindy decided he needed to have a three dimensional body.  She selected her parts models--a Breyer Susecion body and a Silver head and left fore leg--and roughed in the basic form.  After that initial burst of inspiration, progress slowed to a near standstill.  Cindy worked on him on and off (mostly off!) for several years, but it wasn't until early 2013 that she decided her skills had progressed to the point where she could truly do him justice. 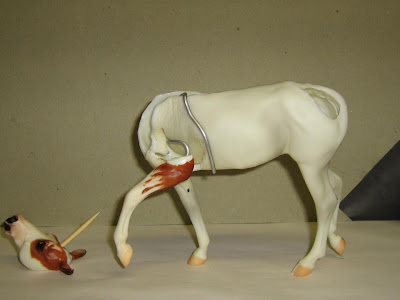 Here's how Cindy describes Prowler: I repositioned the body to a sulking walk and lowered the head and neck into a near "snaking" position. This is not a happy Unicorn! There's wrinkles around his nose, tail swishing and low (like a big cat's), curvy, Marwari-inspired ears laid back. Why is he angry? Did someone invade his privacy? Or has he finally been caught by a wandering virgin with a golden bridle? 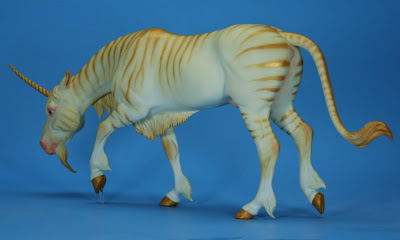 The detail continued to his hair: wavy, messy mane, elegant tuft on the end of his smooth leonine tail, a ventral (chest) mane, quirky feathers on his fetlocks, and a gently swaying goatee. I'm actually very proud of the movement I was able to convey throughout the entire piece. 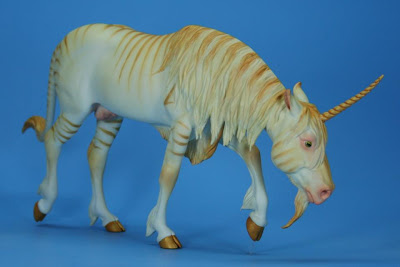 Finally, his color. I struggled with it, unsure of what exactly to do: how do you make the traditional white unicorn unique? He's always reminded me of a big cat, so his stripes have a slight tiger-like quality to them. My inspiration came mostly from Zoe the "Golden Zebra" (who has something called amelanoism, same thing the "white" lions have) as well as perlino dun horses with their green-tinged eyes (although his are more jade with hints of gold). The stripes were layers in pure rich gold acyrlic, with other shading provided by Earth Pigments. 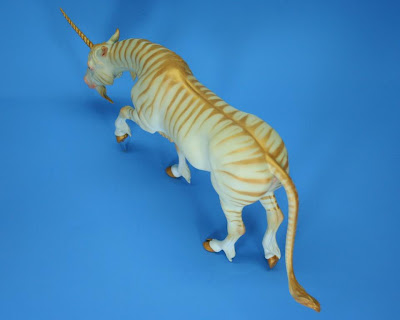 I'm proud to have finally finished him and would dearly love to keep him.... but unfortunately, I can't afford to. So he's up for offers, a completely unique piece that will never be replicated. And just in time: NAMHSA is currently considering giving Unicorns and Pegasus NAN qualifying status in Workmanship and Collectibility, so there's a chance that this guy can go to shows and NAN in the future and NOT just sit around in a cabinet, shelf, or curio! 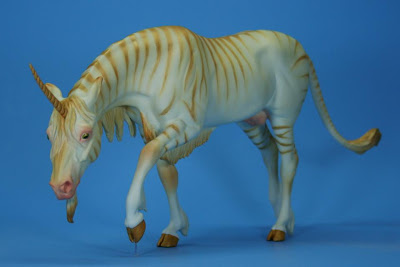 Even though I do not collect unicorns, I would happily make an exception for Prowler. Unfortunately, like Cindy, I can't afford him.  If your pockets are deeper, please check out his ad on Model Horse $ales Pages. 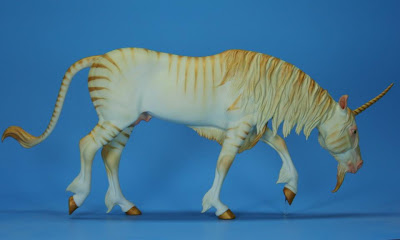 Congratulations, Cindy, for seeing your vision to completion and creating the first--and probably last--unicorn to be featured on this blog!
Posted by Braymere at 8:21 PM