The Other Performance division at the High Plains Live Show opened with the Light Harness class.  Although I didn't have an entry in that class, there was one Braymere "harness" on the table. 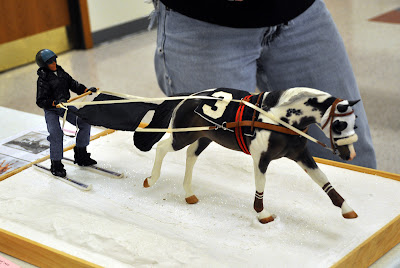 I made this Swiss ski-joring set for Sandy Lyles way back in 2004.  I haven't seen it in years, so it was a real treat to revisit it Saturday.  I was especially pleased to note that it's held up pretty well.  My buckles and keepers are a bit neater nowadays, but nothing on this set made me wince! 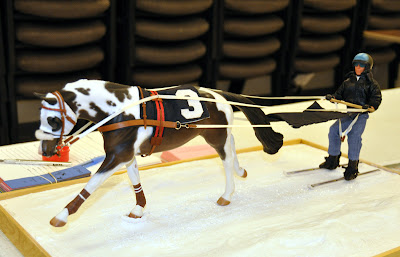 It's worth mentioning that only the harness and bridle are mine.  Sue Rowe made the noseband and Sandy made the blinker hood, boots and doll. 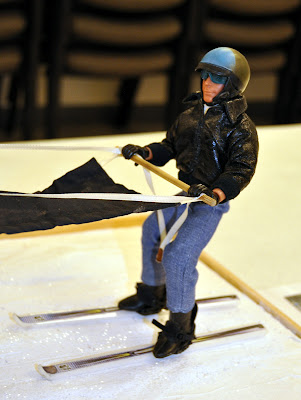 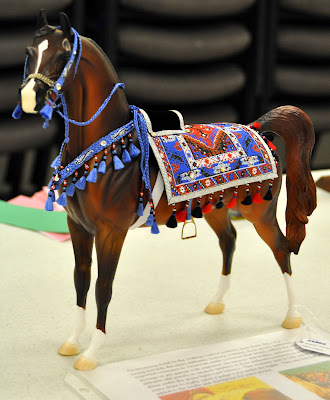 Even though I own several nice costumes, I don't generally show in this class.

Tiffany told me that was ridiculous, so I told her I'd show in the class if she'd do all the work. 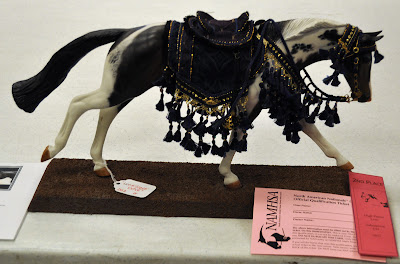 Woo hoo!  It turns out that Tiffany is a really good groom.  My old friend Nejmet won her first ever pink card with the six year costume. 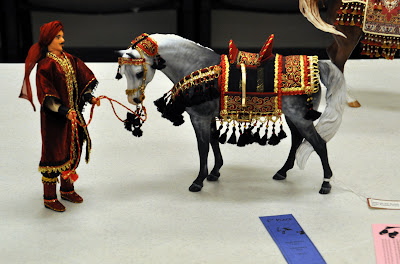 Native American costume is another one I usually skip. 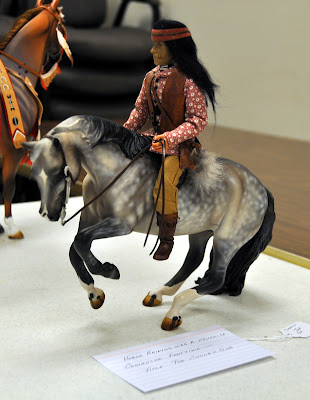 This time, however, there was a Brio Sombra up for grabs. 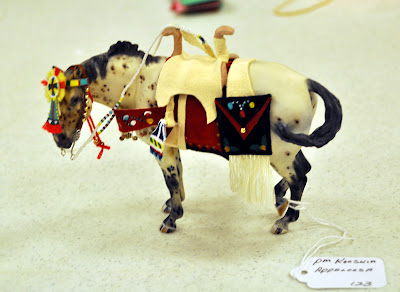 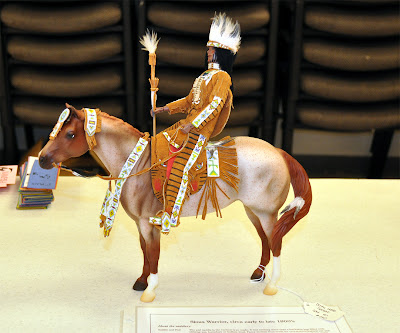 I needed to bring my A-game. 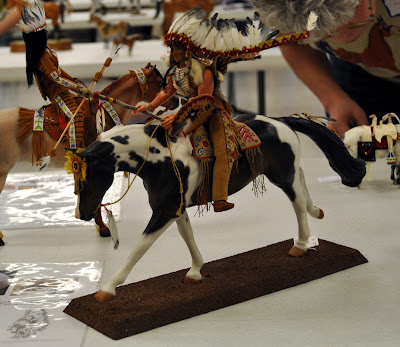 Once again, I leaned on Tiffany.  She came through by lending me this adorable costume... 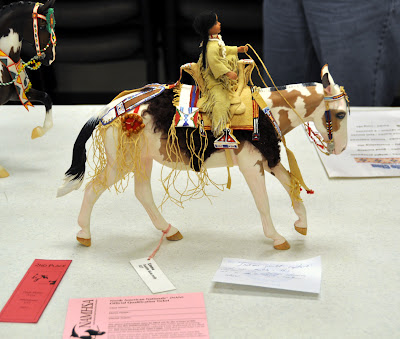 which came complete with some spiffy handwritten documentation! 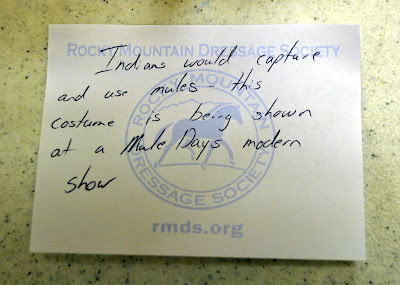 It turns out that Tiffany is not just a world class customizer.  She also makes dolls.  Who knew and why has she been holding out on me? 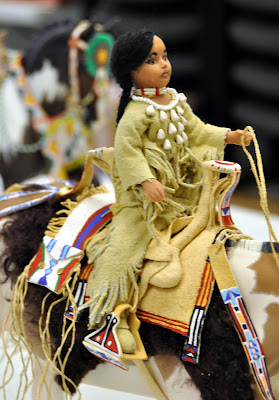 The rest of the costume was made by Shannon Granger of Riversong Saddlery. 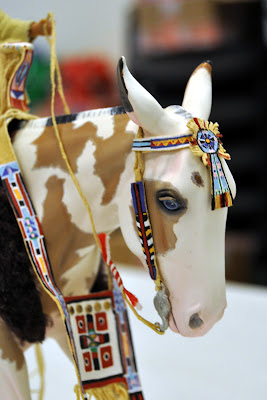 After a quick tack change, Emma was back in another Riversong tack set.  I thought she looked pretty wonderful, but the Parade/Other Costume class was tough. 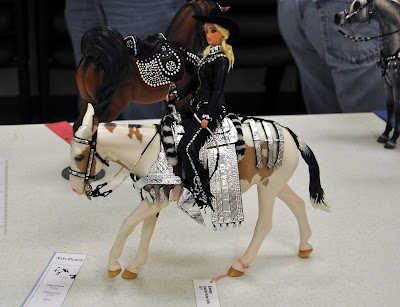 Some of the other entries included Regan's Deseoso, 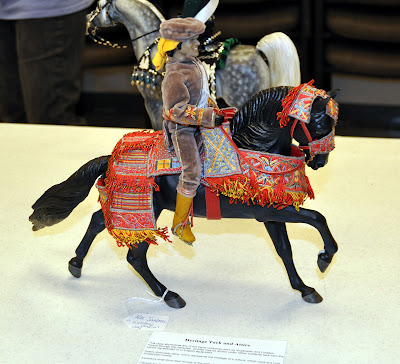 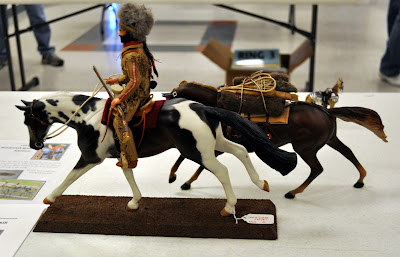 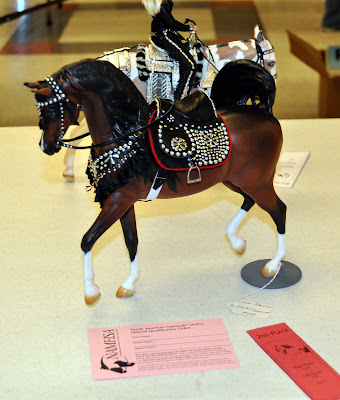 Top honors went to Val's other Arabian, who looked absolutely stunning in this parade entry. 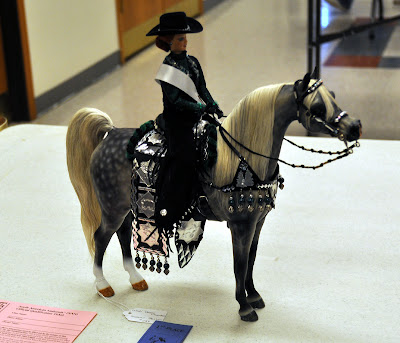 Scene was next.  I was too busy cleaning my house to prepare an entry for this class. 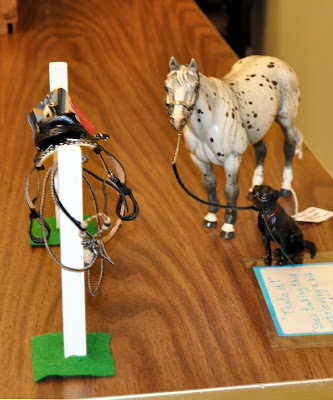 Probably it didn't matter.  It's awfully hard to beat Sandy in this one! 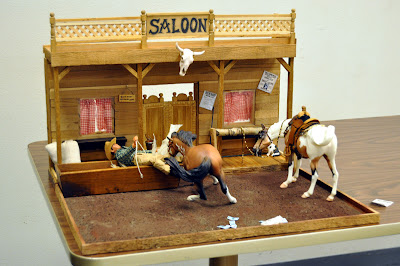 The division wrapped with Other Performance. 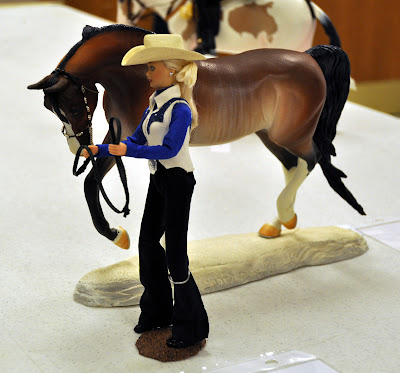 Sandy's Lonesome Dove was back, this time in jousting gear. 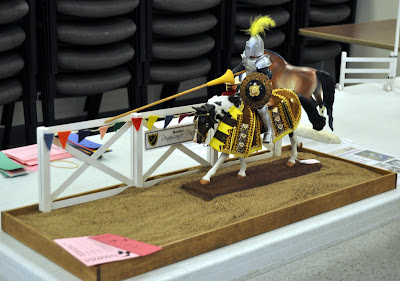 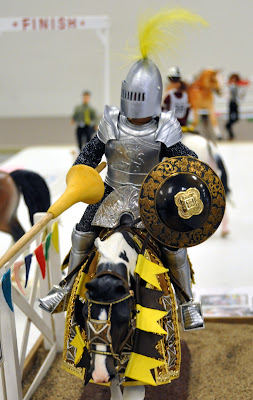 After two near misses, Emma finally broke through to claim her first blue ribbon of the day. 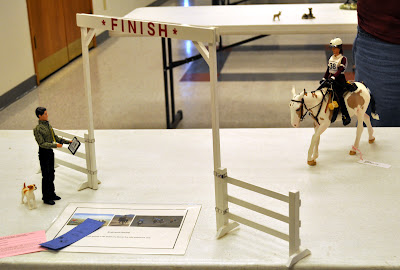 Still, it wasn't enough to challenge Lonesome Dove for the division championship.  He was the clear winner with three first place ribbons, two seconds and a fifth. 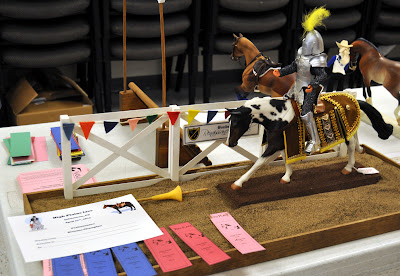 Emma had to settle for the Reserve Championship title.  I didn't know it at the time, but that was a sign of things to come! 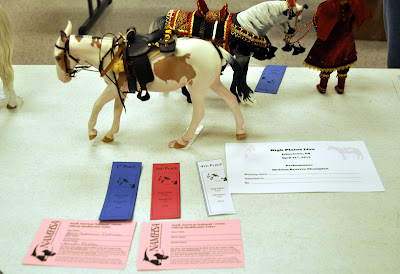 English Performance is next!
Posted by Braymere at 4:22 PM