Although I somehow managed to leave my favorite model at home, the Braymere gang made a good showing in the custom division of yesterday's Colorado Kick-off Show.  Khompounded Interest set the standard early on by winning not one but two blue ribbons in the Half Arabian/National Show Horse class. 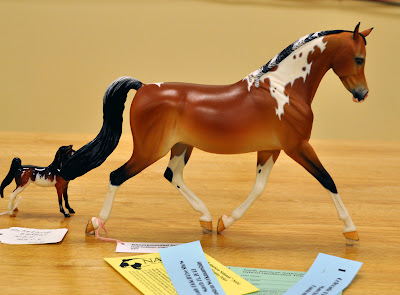 A few minutes later, Quiver nearly matched her with a first and second in the Andalusian/Lusitano class. 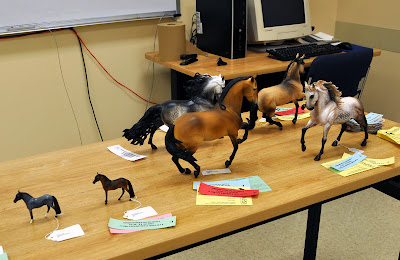 Because this was a small show with a somewhat abbreviated class list, Spanish and Gaited horses were included in the Light Breed division.

This, along with the fact that the show was double judged, made for a pretty crowded call back table. 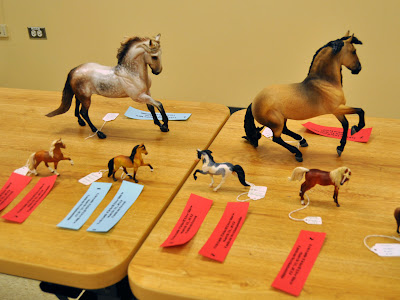 After much deliberation, the workmanship judge, Yashka Hallein, named her champion... 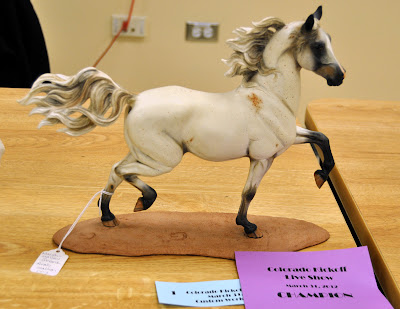 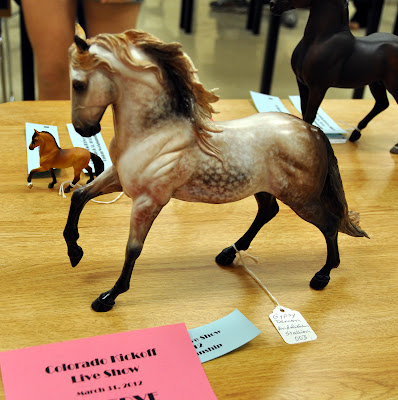 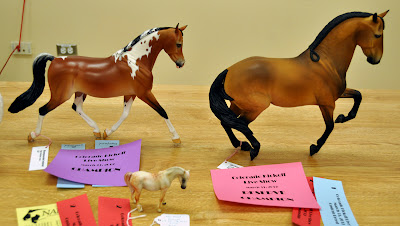 Stock breeds were next. 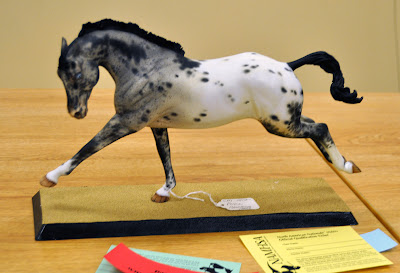 My entries continued to bring home the NAN cards.  Once Upon A Time, a Breyer Strapless customized by Danielle Feldman, won first (breed) and second (workmanship) in the Appaloosa class. 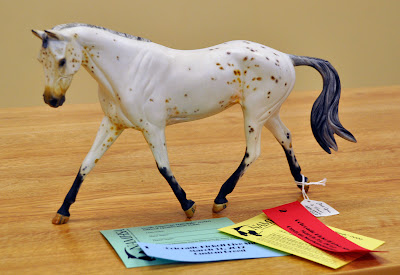 Dun Up Purdy did almost as well, winning two seconds. 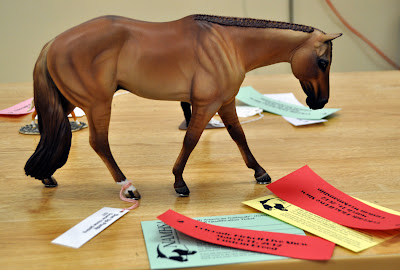 In the end, however, it was Teresa Fedak's Smarty Jones who galloped away with both of the Championship certificates. 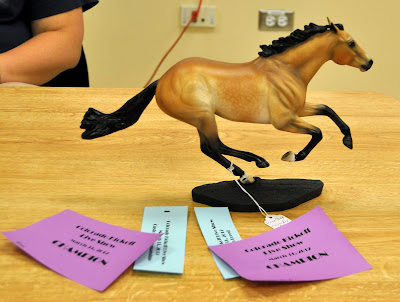 Bridgett Murphy's mustang was right behind him, winning Reserve honors in both breed and workmanship. 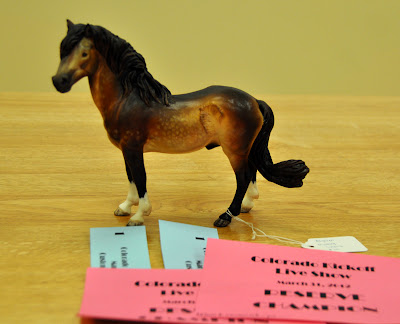 This Lonesome Glory was another double champion, winning both the breed and workmanship titles in the Sport Horse division. 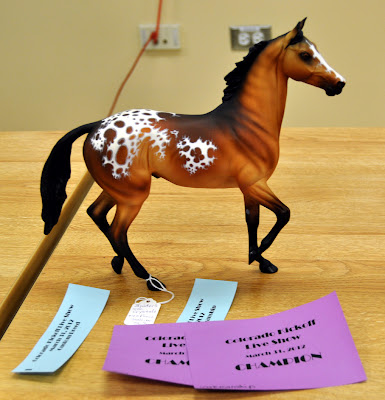 Reserve honors were split between these two horses. 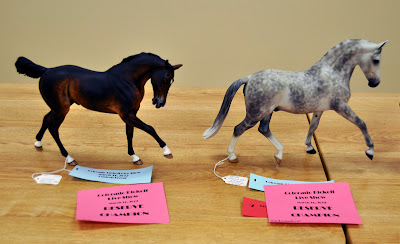 I have to confess that I didn't pay any attention to the Draft Horse division. However, I never ever miss the pony classes. 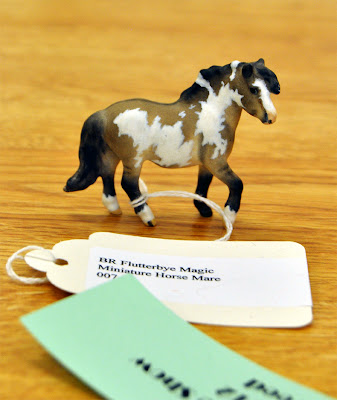 It's a pony parade! 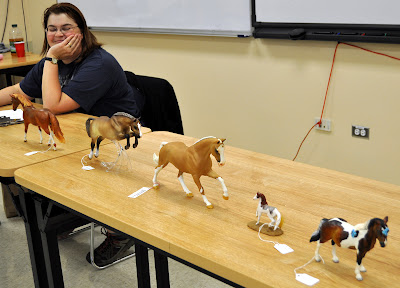 My own Honeyson Fellow did pretty well in the tough American pony class... 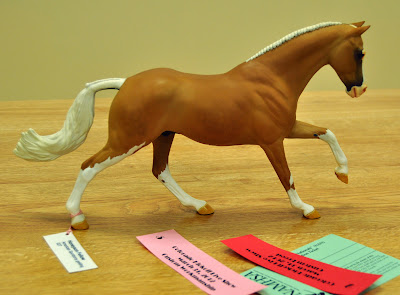 but it was Bridgett's bow pony Snickers who took top honors.  If I remember correctly, she was also named Pony division champion by both judges. 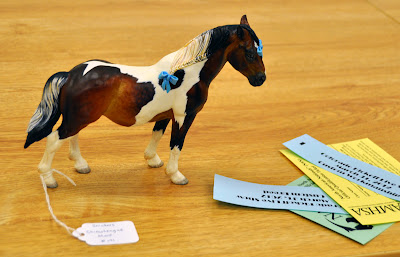 The day wrapped up with the Foal division. 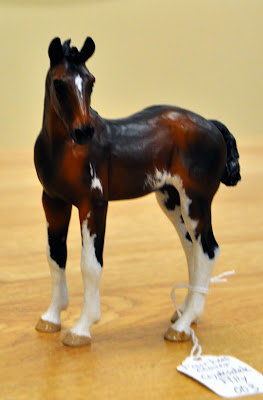 My last minute tag along entry surprised me by winning two NAN cards.  Ravenwoods Sunshine is a Breyer classic Arabian foal customized by me and painted by Suzanne Feld. 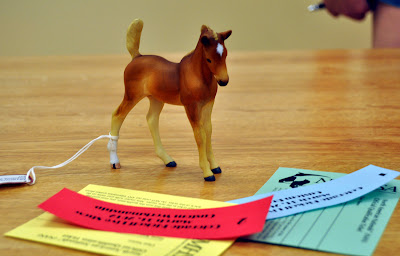 The day ended with the naming of the Overall Custom Champions.  Top honors in the Workmanship division went to this lovely Wintersong owned by (I think) Teresa Fedak. 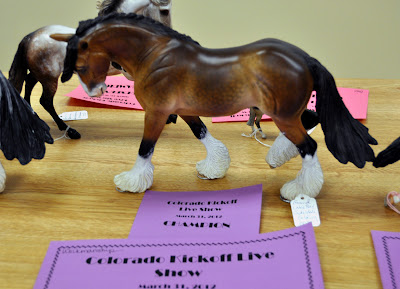 Bridgett's Snickers was the Reserve. 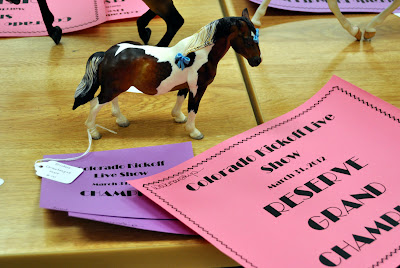 The Overall Championship titles in the Breed division went to my pair of Purdys.  Hurray! 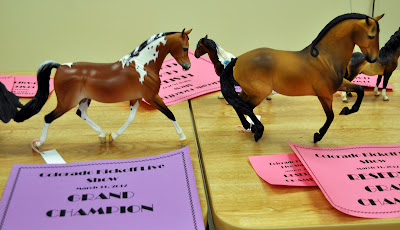 Many thanks to Teresa and Yashka for judging this division.  Resins are next!
Posted by Braymere at 5:20 PM