I still have lots of great show pictures to share, but I have to admit that I've grown weary of the photo show. It's been days of sorting photos, judging photos, scanning photos and typing results... I need a break, so today I'm doing something entirely different. These pictures were posted on Model Horse Blab a few days ago. Undoubtedly some of you have seen them already, but they're too good not to pass along.

This is Pikachu. He is a Pokemon. If you do not have children, you may not be familiar with Pokemon. Consider yourself lucky. My younger son collects Pokemon cards, and they are scattered on every flat surface of my house. I bet there are nearly as many cards in this house as there are plastic horses! Scary thought.

I have looked at many, many pictures of Pikachu, and never once did I see anything remotely equine in his weird little animated face. However the world is filled with people who are far more creative than I. As proof, look at this Japanese racehorse--it's Pikachu on the hoof! How strangely cool is that? 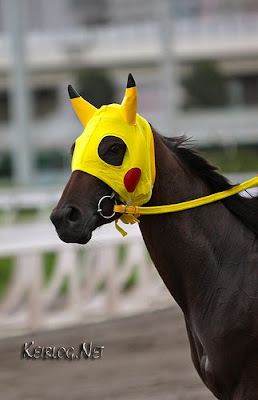 There are a couple horse like Pokemon. Sort of. Maybe. I'm told that Rapidash is the evolution of Ponyta. Does that mean they're really one and the same or are they two separate Pokemon? James has explained this to me at least a dozen times, and yet the logic behind it continues to escape me. In any event, the Ponyta and Rapidash cards belong to me. They were a gift from James, and they are hanging proudly on the wall in my studio among the horse and tack pictures. Somehow they manage to look right at home. 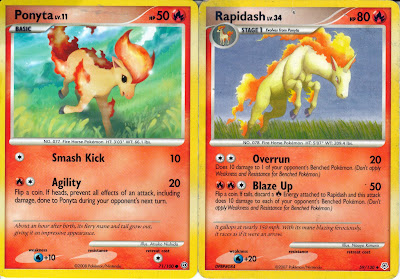 It's not often that our hobbies intersect, but it's kind of fun when they do. Hurray for Pikachu racehorses, Ponyta and Rapidash!
Posted by Braymere at 9:44 AM