My husband and I moved to Denver in 1998. Seth was attending graduate school full time, and I was supporting the two of us on my meager tack shop salary. It wasn't a very good year. Aside from the perpetual poverty, we had ongoing apartment issues. The neighborhood that had looked so charming when we moved in turned out to be extremely loud. The dumpster beneath our bedroom window was a favorite hangout for the local homeless population. Every night was party night out there in the alley. Our street was an ambulance route for several major hospitals so we listened to sirens day and night. Even worse, we had serious crime problems. Mixed in with the cafes and theaters were some unmarked buildings that turned out to be halfway houses and drug rehab centers. Our bikes were stolen off our balcony. One of our neighbors was murdered by another one of our neighbors... When I think back on that year, I mostly remember unending noise and stress.

There were, however, a few bright moments. I attended my first live show and managed to win a few ribbons and make some tack sales. One of those early sales was a classic sized Western saddle I'd made from a Rio Rondo kit. It was purchased by my friend Sandy Lyles who then commissioned a matching bridle and breastcollar to fit her Starfire resin. I didn't have a Starfire (or any other resins for that matter) so Sandy sent me hers.

I remember how excited I was to have that model in my possession. He was a dark bay tobiano, and even though Sandy described him as "just a cheap little resin--nothing special, " I thought he looked like a million bucks. He was so much nicer than anything I owned, and I was sad the day I finally boxed him up and sent him back to Sandy. I would have loved to have kept him!

Eleven years later, I have a quiet house in the suburbs, an established tack business, and a whole shelf full of really nice resins. Life is good, but today it got even better. At long last, I own a Starfire! 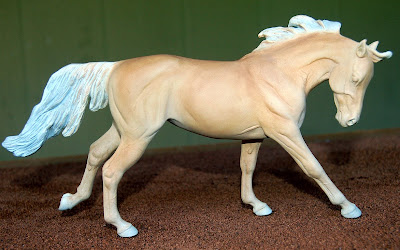 I saw this guy on MH$P last week and I just couldn't resist. He arrived this morning, and I am just as delighted with this cheap, little, nothing special resin as I was eleven years ago. He is so cute! I thought briefly about painting him to resemble Sandy's old pony, but now I'm leaning toward Appaloosa. Either way, he's a keeper. Thanks so much to Lauren for sending him my way!
Posted by Braymere at 2:01 PM