If you're a fan of international dressage, Graf George's recent death is old news. After all, it's been nearly three months since he was euthanized due to organ failure at the age of twenty six. I am, however, a casual dressage fan at best, so I only learned of the sad news a couple days ago.

Graf George was a two time Olympic team bronze medal winner--first with Michael Poulin in 1992 and again with Guenter Seidel in 1996. He also competed in the World Equestrian Games in 1998 and was the US National Dressage Champion in both 1993 and 1998 and the USDF Horse of the Year at Grand Prix in 1998. In recognition of these accomplishments he was immortalized by Breyer as the 1998 USET Festival of Champions Special Run model. 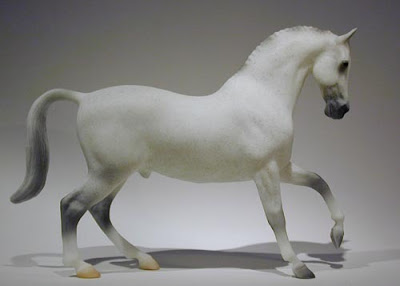 I met George in January 1993 at his winter home in Palm Bay, Florida. My best friend Trisha had a working student position in Michael Poulin's barn that year. I was also wintering in Florida and when I realized I had three full days off between some of the pre-circuit shows, I jumped in the truck and drove south. The opportunity to visit my friend and hang out at an international caliber dressage barn was irresistible! 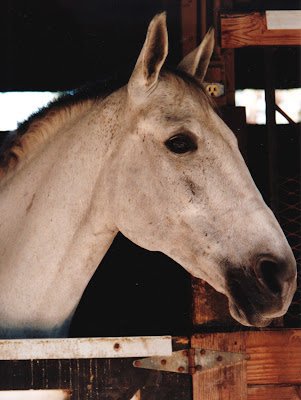 Although the Poulins had a lot of nice horses in training, George was the big star and I was eager to meet him. I'd seen him in pictures, of course. This was, after all, less than six months since his first Olympics. I had some pretty high expectations for him, and was somewhat disappointed to discover that he wasn't anything special to look at in the barn. Not that he was unattractive, mind you, but he was pretty much just a big, normal looking, fleabiten grey horse. 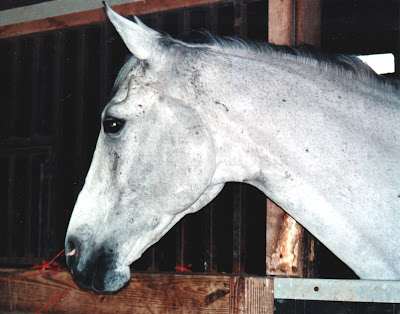 Under saddle, however, was a whole different matter. Unfortunately, the Poulins had a strict rule against photographing horses during schooling sessions. I was sufficiently intimidated by Michael that I didn't even think about trying to sneak a picture past him. As a result, I have no pictures of George wearing tack. That's too bad because George under saddle was everything I'd expected--powerful, elegant, amazing... It was a real treat for me to be near a horse like that and I'll never forget it. 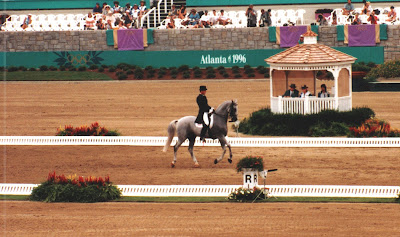 Over the course of the next year or two, Trish and George both left the Poulin's barn. Trish went to Pennsylvania and then back to Colorado. George went to George Lindemann and then Guenter Seidel. They both ended up at the Atlanta Olympics in 1996. Trish was in the stands and George was in the ring. She sent me lots of pictures including these two. 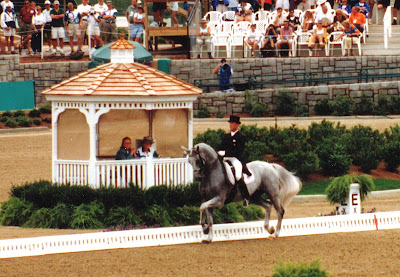 Before I close, I want to share my favorite picture of Trish and George clowning around together. He was a wonderful horse both in and out of the ring, and he will be missed by all dressage fans. 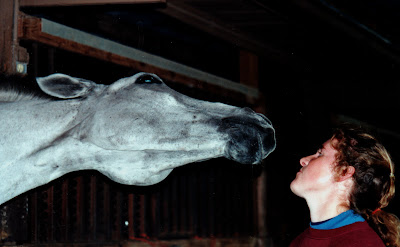 Rest in peace, Graf George! I was lucky to have met you.
Posted by Braymere at 7:55 AM