Every Wednesday night my family gathers around the tv to watch Mythbusters together. In case you haven't seen it, Mythbusters is a show where a pair of special effects experts use basic science to test the validity of various rumors, urban legends, myths and news stories. It's equal parts science and stupidity and there's almost always an explosion or two. My kids love it, and I have to admit that I do, too.

There are a lot of myths perpetuated in the model horse community regarding tack requirements for different performance events. Today I'm going to bust one of them--namely the use of standing martingales in the jumper ring. 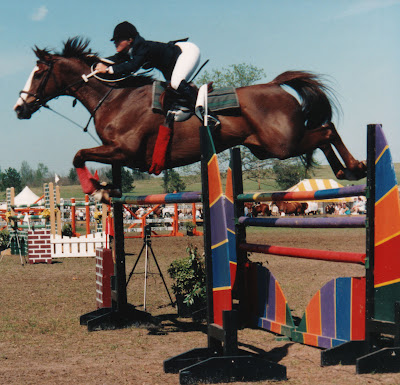 I can not tell you how many times I've heard model horse people say that jumpers are not allowed to wear standing martingales. That's simply not true. If you check out the USEF rulebook, regarding jumper tack and attire, this is what you will find: 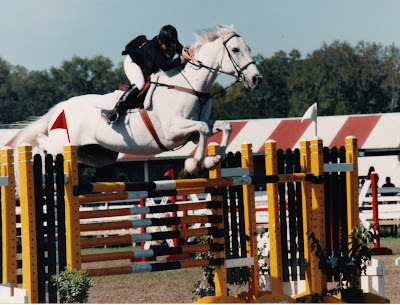 In a nutshell, standing martingales are in fact legal in almost all jumper classes. You may not use them in a Grand Prix or any class run under FEI (international) rules, but you will see them pretty much every where else. 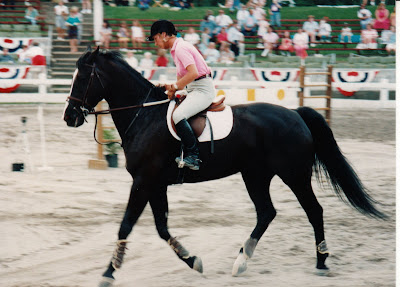 I took the pictures in this post during the 1990's, and with one exception, they all show well know grand prix jumpers of that era. The chestnut horse in the first photo is Catch a Wave. Penny Miller is his rider and the picture was taken during the HITS winter circuit in Ocala, Florida. The horse and rider in the next picture are Mafito and Nancy McClure, also showing in Ocala. The black horse is Mont Cenis, who was owned and ridden by Patty Stovel. I took this picture at the Germantown Charity Horse Show in 1993. The following year they were the top placed American horse and rider at the World Equestrian Games. The horse in the following picture is wearing both a standing martingale and a blinker hood. Unfortunately I didn't label this picture, and now I can't remember the horse's name. I'm pretty sure the rider is Polly Howard, though. 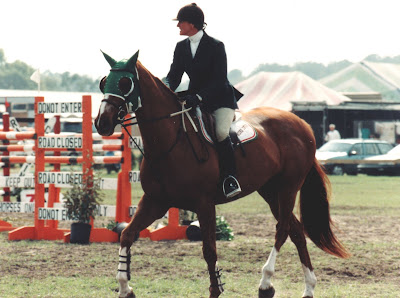 And here's the well know horse exception. I couldn't resist including this picture of my friend Tracey on her jumper Homeward Bound taken at the Kentucky Horse Park. They are sporting a very nice basic jumper turnout, although open front boots would be a more common choice than the wraps Homer is wearing. 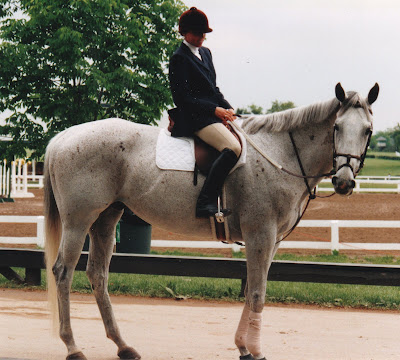 Interestingly, the tack and attire section of the USEF rulebook is very short and mostly focuses on the rider's attire and equipment. The only other tack item with specific limitations on its use is draw reins. Here is the section regarding those:
Draw Reins
Draw reins may only be used when schooling or in classes with less than $1,000.
As with standing martingales, I had no trouble finding pictures of draw reins being used in the jumper ring. Here is one that I took in Ocala, 1994. It shows one of the all-time great jumper riders, Rodney Jenkins. Rodney had come out of retirement to ride Equador during that particular winter circuit, and I was absolutely thrilled to watch him ride day in and day out. I think I have at least two dozen pictures of this combination! 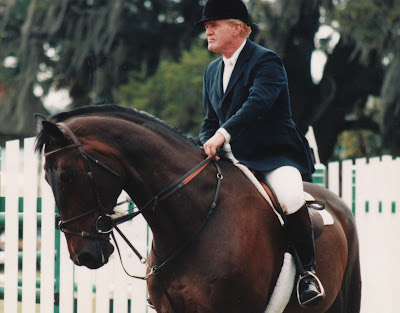 I probably wouldn't put a standing martingale or draw reins on a model jumper myself. I think it would be a sure way to get disqualified by a judge who just didn't know better. However, I hope I've done my part to dispell this particular myth. Jumpers can and do wear standing martingales and the next time you hear someone say otherwise, feel free to correct them for me!
Posted by Braymere at 10:00 AM